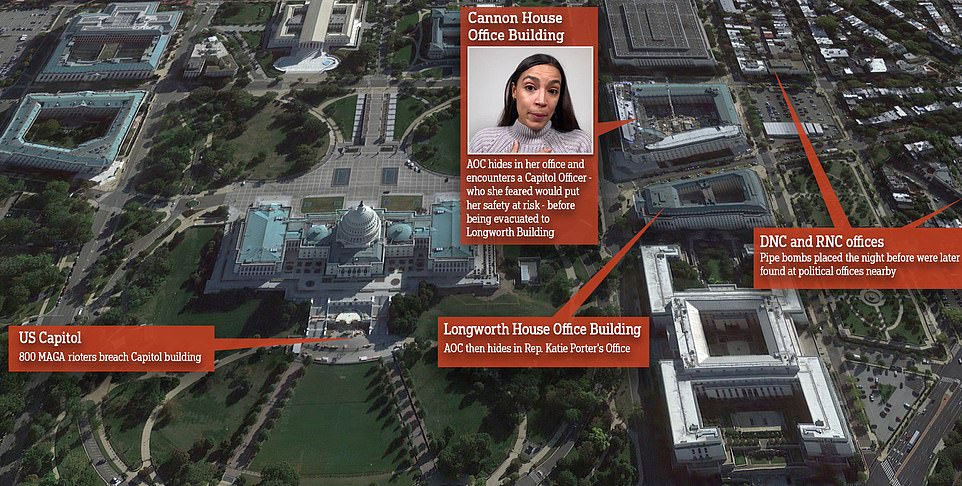 Alexandria Ocasio-Cortez has told how she feared the Capitol cop who was sent to evacuate her from her office during the January 6 riot because he looked at her ‘with hostility’ amid accusations she ‘exaggerated’ her experience because she was never actually in the building that was stormed, and after accusing Sen. Ted Cruz of trying to have her ‘murdered’.

On January 6, Dem. Rep. AOC was in her office in the Cannon Office Building – which was evacuated but not breached – when rioters stormed the Capitol Building 0.3 miles away.

In an Instagram Live video on Monday night, she tearfully described fearing for her life as she hid behind the bathroom door in her office, unaware if it had been breached and unaware that even the Capitol Building had been breached.

She had been pondering what to order for lunch, she said, when ‘all of a sudden’ she heard ‘loud bangs’ and ‘booms’ with ‘no voices’. Terrified, she ran into the bathroom in the back of her office to hide behind the door. Then, she watched a ‘white man in a black beanie’ walk into her office, yelling ‘where is she?!’

He was a Capitol cop who had come to evacuate her and get her to safety.

But even after being told he was a cop, AOC says she was suspicious of him because he had ‘no partner’, was ‘yelling’ and looked at her ‘aggressively’.

‘There was no partner. He was not yelling “Capitol Police”…it didn’t feel right. He was looking at me with a tremendous amount of anger and hostility and things weren’t adding up. Like so many other communities in this country, just that presence doesn’t necessarily give you clear signal if you’re safe or not,’ she said.

The cop told her to run over to the Longworth House Office Building, where she pounded on the door of Rep. Katie Porter and begged to be let inside. The pair sheltered there and AOC told Porter – who was ‘drinking a cup of coffee’ – that she wanted to survive the day and go on in life to become a mother.

On January 6, AOC tweeted that she’d barricaded ‘for hours’ but she didn’t say where. On January 13, she said she ‘thought she was going to die’ and ‘many of us narrowly escaped death’.

Now, she is being accused of dramatizing her experience because she was never in the Capitol Building, nor did she encounter any insurrectionists.