New York City is on course for one of worst snowfalls since 1869: Slow-moving storm dumps two inches of snow every hour – as Cuomo warns ‘this is as serious as a heart attack’ and says New Yorkers should expect to be home for two days 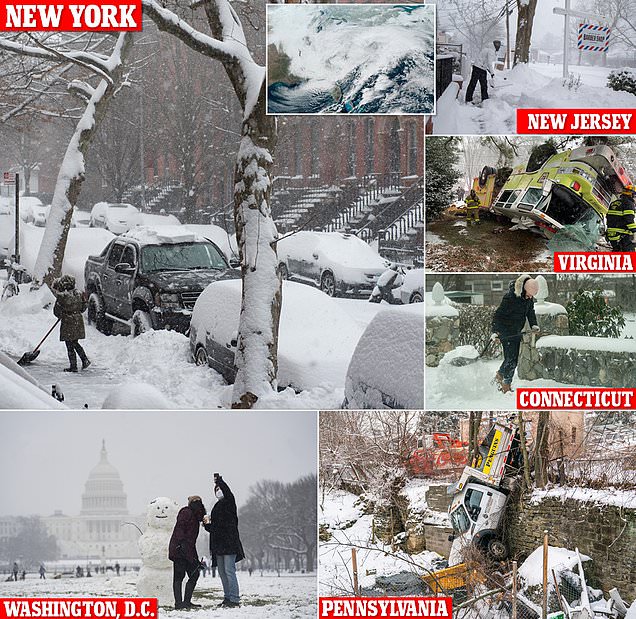 New York City is on its way to recording one of the heaviest snowfalls since 1869 with forecasters predicting that Winter Storm Orlena will drop two inches of snow every hour in the Big Apple as Gov Andrew Cuomo warned New Yorkers to take the weather serious and expect to be home for two days.

During a press conference on Monday afternoon, Cuomo said the storm is ‘only going to get worse’.

‘Snow plows cannot keep up with two inches per hour,’ Cuomo said. ‘We’re looking at a long two days here,’ he added, urging New York residents to stay inside. ‘If you are not an essential worker you should not be on the roads during the state of emergency.’

Cuomo said some roads in the state are now impassable just before Sarah Feinberg, the interim president of the New York City Transit Authority, confirmed that outdoor subway service will be suspended at 2pm. ‘Underground service will continue to operate. Some bus routes may be suspended in the coming hours,’ Feinberg added.

Officials also announced that 90 per cent of flights have been canceled across New York City and it’s expected that the few remaining flights will also be canceled.

Orlena is predicted to bring blizzard-like conditions and drop between 18 to 24 inches of snow in New York City from Monday into Tuesday, coupled with wind gusts up to 45 to 55mph.