Jazmonique Strickland, the wife of pastor and former president of the local chapter of the NAACP Stricjavvar ‘Strick’ Strickland of Second Baptist Church of Kalamazoo, Michigan, is arrested ‘for sexually assaulting at least four boys with her husband, who paid teens to have sex with the mom-of-five while he watched’ possibly leaving their children without parents as they may spend decades in jail

The pregnant wife of a former Michigan pastor has been accused of sexually assaulting multiple teenage boys as her husband watched in exchange for cash.

Jazmonique Strickland, 27, turned herself in to the authorities on Monday and was charged with eight felony counts of child sexual assault and abuse, and human trafficking of a minor for commercial sexual activity.

The woman is married to Stricjavvar ‘Strick’ Strickland, 38, the former executive senior pastor at Second Baptist Church of Kalamazoo. 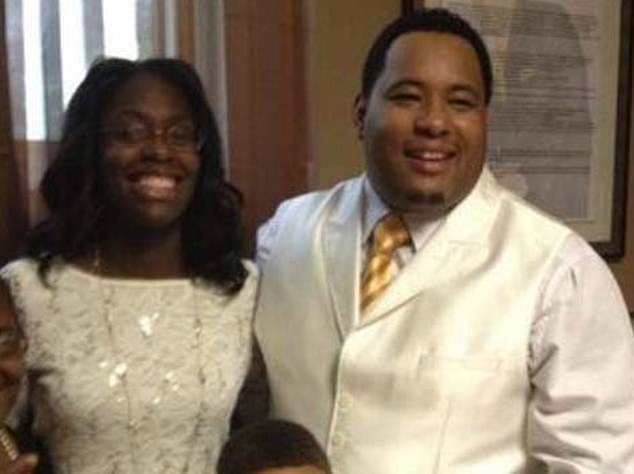 Prosecutors alleged that the couple, who have five children together, with a sixth on the way, recruited at least four boys between the ages 15-17 for sex from Phoenix High School, where Jazmonique worked as a secretary, and from her husband’s church.

The allegations first came to light in 2018, when two of the alleged victims and a parent came forward to the authorities, leading to a raid on the Strickland family’s home.

According to court documents cited by Mlive.com, the Stricklands paid the teens to have sex with the wife while her husband watched. The incidents were said to have taken place between August 2015 and August 2018.

An alleged victim told detectives that he was introduced to Jazmonique during the 2017-2018 school year and on one occasion was offered $50 in exchange for his naked selfies.

On another occasion, the boy claimed Strickland asked him to have sex with his wife at the couple’s home in front of him and paid him $100.

The pastor also has been accused of paying two boys $100 each so he could watch his wife perform oral sex on them. 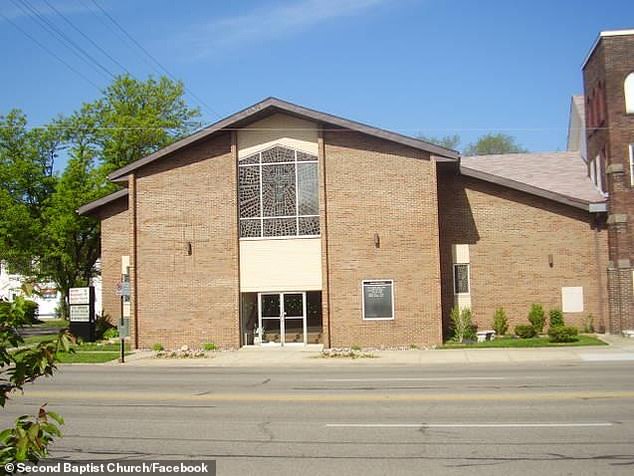 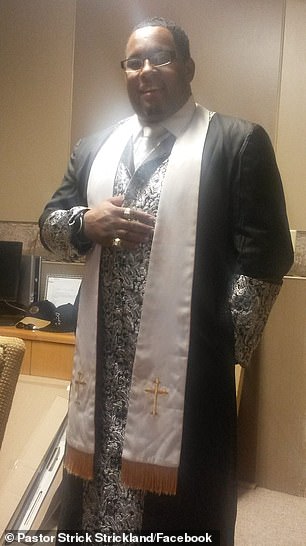 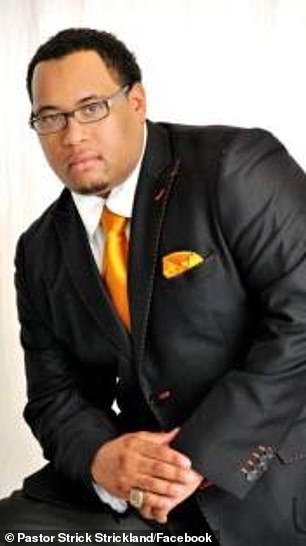 The married dad allegedly sexually assaulted one of the teens and then gave him money after the victim told him to stop, according to the filings.

Another teen told detectives he was 16 years old in 2015 when the pastor paid him cash in exchange for his naked photos. When the child turned 17, Strickland allegedly coerced him into allowing him to perform a sex act on the teen, and in return offered him the use of his car.

In 2019, yet another alleged victim came forward, telling police that when he was 15 years old in 2015, the pastor paid him $200 to have sex with his wife in the couple’s basement, which he claimed was not an isolated incident. 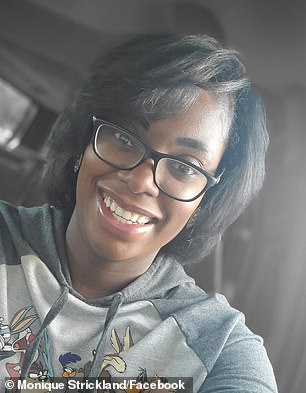 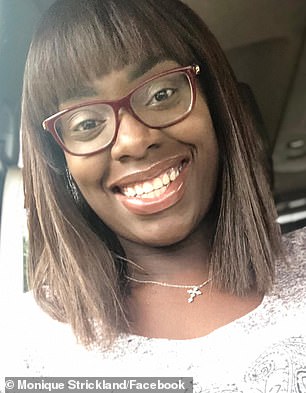 Strick Strickland has denied the claims and expressed confidence in the outcome of the case, telling WWMT: ‘We look forward to our day in court. We will prevail.’

The pastor, who previously served as the president of the local chapter of the NAACP, was removed from his post at the church in July and turned himself in to the authorities in early September, a day after the Michigan State Police declared him a fugitive.

He was released on a $500,000 personal recognizance bond, allowing him to leave jail without having to pay any money on the promise that he will show up to court.

Strickland was permitted to return to his home in Mississippi, where he has been working on a horse farm to support his large family, including children from a previous relationship.

The 38-year-old father-of-eight is scheduled to go on trial on April 26. If convicted as charged, he could face decades in prison.

Jazmonique is due back in Kalamazoo County District Court for a probable cause conference on February 3. Like her husband, she was issued a $500,000 personal recognizance bond and allowed to travel back to Mississippi.

Kalamazoo pastor paid teenage boys to have sex with his wife, police say

KALAMAZOO, MI — A Kalamazoo pastor accused of sexually assaulting four male victims between the ages of 15 and 17 is said to have paid the children to have sex with his wife while he watched.

The Rev. Stricjavvar “Strick” Strickland, of Kalamazoo’s Second Baptist Church, has been charged with 11 felonies connected to alleged incidents spanning from Aug. 1, 2015- Aug. 31, 2018, according to a probable cause affidavit filed last week in Kalamazoo County District Court.

“It has been two years since these allegations first came forward and Pastor Strickland has remained in contact and available. He is not running from this,” Hills said. “Pastor Strickland remains ready to turn himself in and deal with these charges accordingly.”

Strickland, 37, faces two counts of third-degree criminal sexual conduct on a student, another on a person age 13-15 and another by force or coercion, according to court records. He also faces four counts of human trafficking of a minor for commercial sexual activity and three counts of child sexually abusive activity.

In a bond recommendation, filed with the court along with the arrest affidavit, Kalamazoo County Assistant Prosecutor Christin J. Mehrtens-Carlin recommends the court not allow the pastor to have any contact with the four alleged victims, his wife Jazmonique Strickland, or anyone under the age of 18.

“Per the reports, the defendant and his wife would use their employment at Phoenix High School (in Kalamazoo) and to some extent, the defendant would use his work as a pastor, to find male teens to engage in sexual activity with the wife, while the defendant watched and masturbated,” Mehrtens-Carlin writes in her bond recommendation.

The four said to be victims in the case ranged in age from 15-17 when the alleged acts occurred, she wrote.

Mehrtens-Carlin, who is recommending a cash or surety bond of $500,000 in the case, said it is also alleged that Strickland engaged in similar behavior with his ex-wife years ago while living in Mississippi.

Strickland, when reached by MLive Tuesday, called the charges “absolutely preposterous” and said he still had no information regarding the specifics of the allegations levied against him.

“All I can say for now is that we are prepared for this fight,” the pastor said. “God will prevail.”

Michigan State Police Detective Sgt. Scott Ernestes wrote about the specifics of the allegations in the probable cause affidavit, which was filed Aug. 18.

Ernestes wrote in the affidavit that he was first contacted in August 2018 by two juveniles and one of their fathers referencing a potential sexual assault that occurred during the years 2015-18.

At that point, an investigation began, Ernestes wrote.

Both of the boys, who turned 17 during that school year, were alleged to have been paid $100 each to have sex with Jazmonique Strickland on separate occasions while her husband watched, the affidavit states. The pastor is also alleged to have paid the children each $100 so he could watch his wife perform oral sex on them.

Additional money was allegedly given to one of the boys to text nude photos to the pastor, the affidavit states. The pastor also allegedly sexually assaulted one of the boys and then gave him money after the boy told him to stop.

A third victim, interviewed in September 2018, told the detective he was 16 years old in 2015 when he was first asked to send the reverend nude photos in exchange for money.

Later, when the boy was 17, Strickland coerced the child into allowing him to perform oral sex on the boy, according to the detective’s affidavit. In exchange, Strickland allowed the boy to use the pastor’s vehicle, the affidavit alleges.

Ernestes states he interviewed a fourth victim in February 2019. The victim told the detective he was 15 years old in August 2015, when he was paid $200 by Strickland to have sex with the pastor’s wife on a couch in the couple’s basement. According to Ernestes’ report, the victim claimed this type of incident happened on other occasions during 2015 and 2016 as well.

In February 2019, five days after Ernestes interviewed the fourth individual, Hills and Strickland hosted a press conference where the two denied any wrongdoing had occurred whatsoever.

In a separate Kalamazoo County court case, Strickland faces an assault charge stemming from an incident with a former church deacon that occurred at the Second Baptist Church in December 2019. That misdemeanor case is currently set for trial beginning Sept. 30 in Kalamazoo County District Court.

Strickland has been pastor at Second Baptist Church in Kalamazoo since 2012. He also previously served as the NAACP Kalamazoo Chapter president from 2016-18.

There are no charges pending against Jazmonique Strickland at this time.

A probable cause conference in the sex crimes case against Strickland that was scheduled for Thursday, Oct. 22, 2020, was waived and pushed until early December, Hills said.

Investigators claim that Strickland, a former pastor at Second Baptist Church in Kalamazoo, and his wife, Jazmonique Strickland, paid teens for sex. Strickland has denied the allegations.

Authorities said Strickland and his wife used their positions within the church and the Kalamazoo Public Schools to coerce four teen boys into having sex.

Strickland turned himself in at the Kalamazoo County Jail on Thursday, Sept. 3, 2020, the day after Michigan State Police declared him a fugitive. He was released on a $500,000 personal recognizance bond, which means the judge allowed Strickland to be released without any deposit or collateral.

The conditions of his bond also allowed Strickland to return to his home state of Mississippi, court records show.

Hills said Strickland, a father of eight children, had been working at a horse farm in Mississippi to support his wife, Jazmonique, 28, who is pregnant with the couple’s sixth child together.

No charges have been filed against Jazmonique Strickland.

Michigan State Police said its investigation into the Strickland couple is still ongoing.