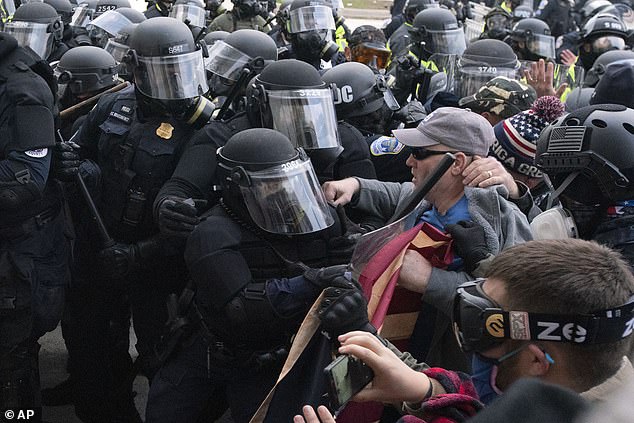 The head of the Capitol Police apologized to Congress for stunning security failures during the MAGA riots on January 6 and acknowledged that the agency had been forewarned of a ‘strong potential for violence’ but failed to take adequate steps to prevent it.

Acting Chief Yogananda D Pittman made the extraordinary admissions in a statement before the House Appropriations Committee on Tuesday, nearly three weeks after a mob of President Donald Trump’s supporters stormed the Capitol in a bid to block the certification of Joe Biden’s election victory.

‘On January 6th, in the face of a terrorist attack by tens of thousands of insurrectionists determined to stop the certification of Electoral College votes, the Department failed to meet its own high standards as well as yours,’ Pittman told the committee, which oversees funding for USCP, in a statement obtained by DailyMail.com.

‘Let me be clear: the Department should have been more prepared for this attack,’ she continued. ‘By January 4th, the Department knew that the January 6th event would not be like any of the previous protests held in 2020.

‘We knew that militia groups and white supremacists organizations would be attending. We also knew that some of these participants were intending to bring firearms and other weapons to the event. We knew that there was a strong potential for violence and that Congress was the target.’

‘The Department prepared in order to meet these challenges, but we did not do enough.’

The statement from Pittman, who was promoted to acting chief when former chief Steven Sund stepped down in the wake of the riots, offered the most detailed account yet of the USCP’s preparations for the insurrection, which led to the deaths of five people, including one of its officers.