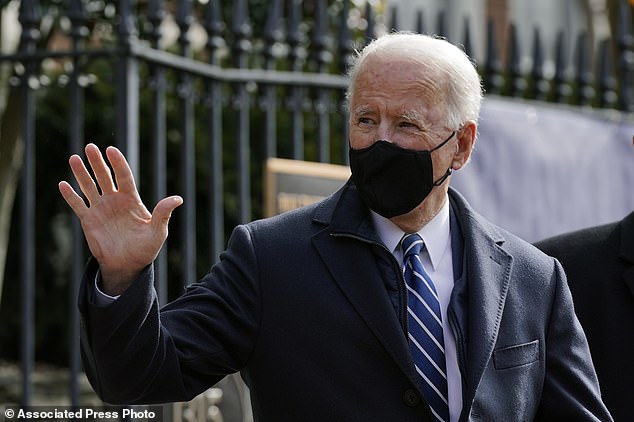 President Joe Biden attended Mass for the first time since taking office, worshipping Sunday at the church he frequented when he was vice president.

Biden entered through the front, where a Black Lives Matter banner was hanging on one side and a banner with a quote from Pope Francis was on the other: ‘We cannot tolerate or turn a blind eye to racism and exclusion in any form and yet claim to defend the sacredness of every human life.’

The president, in a brief exchange with reporters, said the service was ‘lovely’. He was accompanied to church by his son, Hunter, and two of his grandchildren, Finnegan, 21, and Maisy, 20.

His motorcade made a brief stop on the way back to the White House for carryout from Call Your Mother, a popular deli near the church. The president remained in his armored vehicle, while his son picked up the order.

White House press secretary Jen Psaki told reporters on Friday that Biden had not yet settled on a home church in the nation’s capital, but said that she expected Biden will continue to regularly attend services during his presidency.