Wow: Joe Biden’s socialist hero: Latino union firebrand Cesar Chavez fought against illegal immigrants but brutally purged anyone who defied him (while hushing his many infidelities to keep up his Catholic family man image) 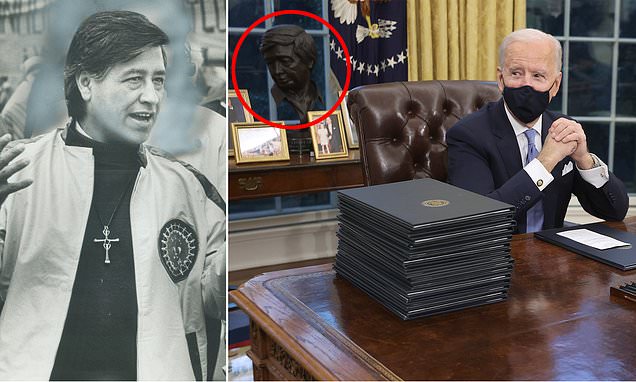 There is a new radical socialist in the White House, and Joe Biden also moved in yesterday.

A bust of firebrand Latino union leader Cesar Chavez now takes pride of place behind the President’s chair in the Oval Office, under a new decor regime that includes numerous civil rights leaders at the expense of a bust Winston Churchill.

The statue of Chavez is nestled among an array of framed family photos displayed on a desk behind the new president and replaces a statue of Andrew Jackson that sat behind President Trump.

Chavez is a controversial figure for many, idolized as a charismatic ‘folk saint’ union leader who fought for greater rights and more pay for thousands of Latino farm workers during decades of strikes in California in the Sixties and Seventies.

The union leader modeled himself after Indian civil rights leader Ghandi, favoring non-violent tactics such as strikes and pickets and imbuing his protests with references to Roman Catholicism, including vigil and calling dead farmworkers ‘martyrs’.

His slogan ‘Si Se Puede’ translates as ‘Yes We Can’, later used by Barack Obama to successfully win the White House decades alter.

But for his critics, Chavez is a socialist firebrand who entranced followers with his ‘personality cult’ and then ruled his union with an iron fist, periodically executing brutal purges of his enemies. He was also repeatedly accused of being a communist but went as far as suing those behind the accusations and was monitored by the FBI throughout his activities.