There’s a devil loose: Texas man pleads guilty to helping his father avoid arrest for more than a decade after he ‘shot dead his daughters, 17 and 18, in so-called honor killings for dating non-Muslims’ 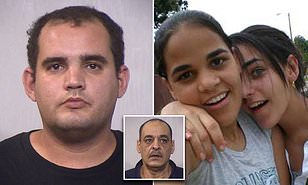 A Texas man has pleaded guilty to helping his father evade arrest for over 12 years after he allegedly shot dead his teen daughters as part of so-called ‘honor killings’ when he found out they were dating non-Muslim men.

Law enforcement officials said the murders were so-called ‘honor killings’ in which a woman is murdered by a relative to ‘protect’ her family’s honor.

In this case, the young women had tried to hide from their father that they were dating non-Muslim men, but he found out and then killed them, authorities said.