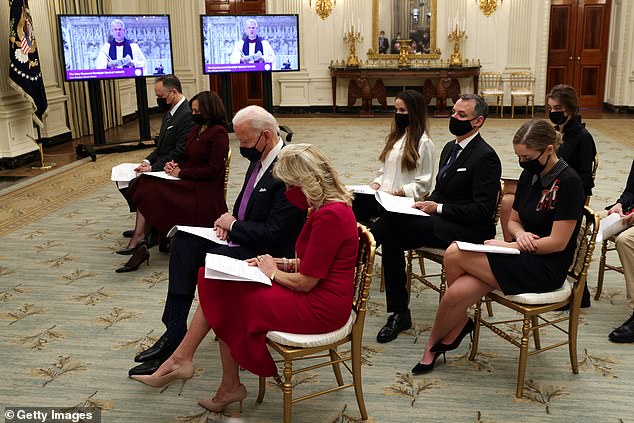 First Lady Jill Biden cut a stylish figure in a cherry red dress and a matching mask while watching a virtual inauguration prayer service with her family on Thursday in the State Dining Room at the White House.

The 69-year-old educator and her husband, President Joe Biden, were joined by their daughter Ashley and their grandchildren, as well as Vice President Kamala Harris and second gentleman Doug Emhoff, after celebrating the inauguration the night before.

Mrs. Biden continued to champion American designers in her fit-and-flare dress by Brandon Maxwell, which featured elbow-length sleeves and a hem that hit right below her knees.

She broke up the monochromatic look with a pair of classic nude pumps. As an added touch, she donned a long, layered pearl necklace, a gold watch, and a mix of pearl and gold bracelets.

While she stood out in red, her husband started his first day on the job in a bipartisan purple tie — a mix of Democrat blue and Republican red.

Vice President Harris, 56, looked sleek in a calf-length burgundy coat and a matching dress by American designer Prabal Gurung, which she paired with sheer black tights and heels. Harris topped off the look with a black mask and a black pearl necklace.

The founders of AKA are often referred to as the ‘Twenty Pearls,’ according to Town & Country, and Harris has worn a pearl necklace on important occasions in her life since graduating from the historically black university.

Ashley Biden, 39, and her husband Howard Krein sat behind her parents, with the First Daughter opting for a sophisticated white silk blouse and black pants.

And while they were undoubtedly up late the night before, some of the Bidens’ grandchildren were also present at the service.

Hunter Biden’s daughter Finnegan sat directly behind her grandmother Jill wearing a short-sleeve black dress featuring a black and white striped collar and a red sequin design at the shoulder.