Amanda Gorman, 22, becomes the youngest inaugural poet ever with her reading of ‘The Hill We Climb’ which urges America to ‘leave behind a country better than the one we were left’ 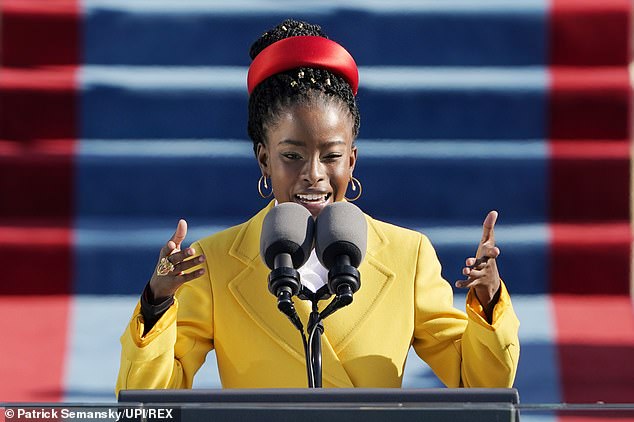 Amanda Gorman made history as the youngest inaugural poet in US history with her reading of the moving poem ‘The Hill We Climb’ at Joe Biden’s swearing-in ceremony Wednesday.

Gorman, a 22-year-old from Los Angeles who grew up with a speech impediment, was invited late last month to recite a poem by Jill Biden.

In the powerful piece she called for unity and strength, especially in the wake of the January 6 Capitol riot, saying ‘But while democracy can be periodically delayed, it can never be permanently defeated.’

‘So let us leave behind a country better than one we were left with,’ she recited, urging Americans to choose peace.

The young poet revealed she wrote a few lines a day and finished her piece writing late into the night of January 6, hours after a mob of frenzied Trump supporters stormed the Capitol Building in a jarring attack that shocked the nation.