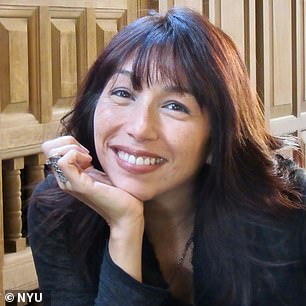 An NYU professor has been slammed for claiming in a Washington Post op-ed that black and Hispanic voters supported Trump because of something called ‘multiracial whiteness’ which separates them from their own race.

Cristina Beltran – who describes herself using the gender neutral term ‘Latinx’ – wrote last week that it was a surprise to see Latino and black faces among the MAGA mob that stormed the Capitol, and that it was also ‘unsettling’ that ‘a quarter to a third of Latino voters voted to re-elect Trump’.

She rationalized their preference for him with the idea of ‘multiracial whiteness’ which is the idea that white is more than a race or racial identity.

‘I call this phenomenon multiracial whiteness — the promise that they, too, can lay claim to the politics of aggression, exclusion and domination,’ she wrote.