Putin critic Alexei Navalny is detained by Russian police after he arrives back in Moscow; We think it was dumb for him to go back 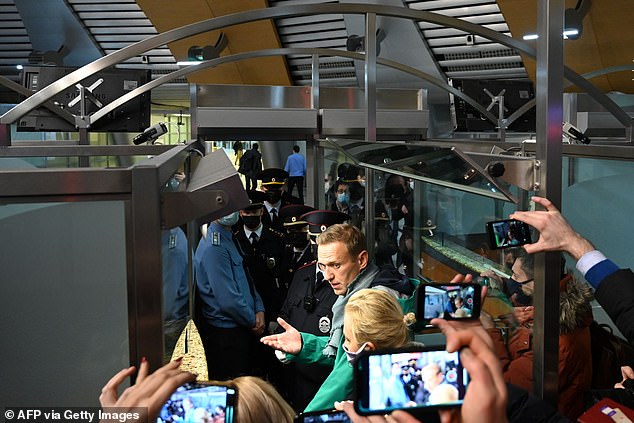 Kremlin critic Alexei Navalny remained defiant and said he was ‘not afraid’ minutes before he was arrested by Russian authorities in Moscow.

Navalny was detained by police at the city’s Sheremetyevo airport after he landed on a flight from Berlin.

Officers arrested Navalny when he showed his passport to border guards before formally entering Russia, five months after he was poisoned by a Novichok nerve agent.

Minutes before he was detained, Nevalny said he was ‘very happy to be back’, adding that he did not fear being arrested. ‘This is the best moment in the last five months,’ he said. ‘I’m home.’

‘I am not afraid… because I know that I’m in the right, I know that the criminal case against me are fabricated,’ Navalny told reporters.

In an emotional scene, he was pictured hugging and kissing his wife Yulia goodbye before being taken away by police.

His spokeswoman Kira Yarmysh confirmed he had been arrested, saying on Twitter: ‘Alexei was taken away by police officers at the border. With no explanation given.’

Navalny, one of Russian President Vladimir Putin’s most prominent critics, had boarded the plane bound for Moscow today, despite Russian authorities’ stated desire to arrest him and potentially jail him for years.

Russia’s Federal Prison Service said in a statement Nevalny has been detained due to the alleged violations of his suspended prison sentence for embezzlement.

They said he would be held in custody until a court hearing later this month that will rule whether to convert his suspended sentence into a real time three and a half year jail term.

Putin’s spokesman, Dmitry Peskov, responded to a question about the arrest by saying ‘Was he arrested in Germany? I’m not up to date,’ according to the online news site Podyom. Peskov, like Putin, is noted for avoiding saying Navalny’s name.