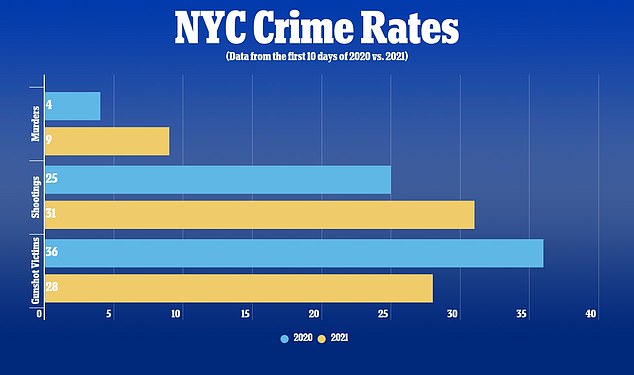 Murders in New York rocketed by 125 per cent in the first 10 days of 2021 with a 20-year-old man shot dead just one hour after the ball dropped in Times Square.

Nine people died between January 1 and 10 this year, compared to four in the same period last new, new figures have shown.

The first victim of the year in the Big Apple was a 20-year-old man shot dead minutes after midnight outside the notorious Umbrella Hotel in Kew Gardens in Queens.

Shootings have surged by 24 per cent on last year, from 25 to 31 incidents.

Gunshot victims increased by 29 per cent from 28 to 36, including a 33-year-old woman struck by a stray bullet as she lay in bed in Brooklyn just minutes after New Year’s Eve fell.

The early violence does not bode well for 2021, considering the number of shootings and gun victims in 2020 matched the totals for the two prior years combined.