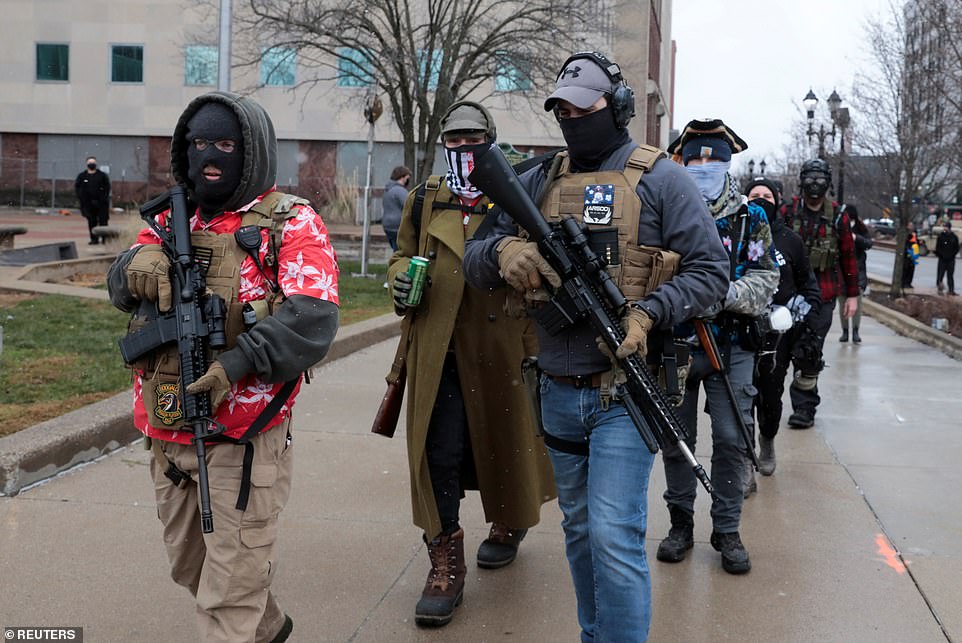 Armed supporters of President Trump descended on state capitals nationwide on Sunday as members of the anti-government Boogaloo Boys brandished semi-automatic weapons near the Michigan State Capitol while Washington, DC, was turned into a fortress.

The nation’s capital looks like a military zone with National Guard and local police setting up checkpoints and a huge perimeter outside the US Capitol building just 10 days after it was stormed by MAGA rioters.

Despite the heavy military presence, a 22-year-old Virginia man was arrested for possession of three high capacity magazines, 37 rounds of unregistered ammunition, and a Glock gun near the US Capitol on Sunday while a Connecticut woman was detained for impersonating a police officer as the nation’s capital remains on high alert in the days leading up to Wednesday’s inauguration of President-elect Joe Biden.

Meanwhile, Starbucks has shut down all of its New York City locations on Sunday – reportedly for fear of protests – while security was beefed up around State Capitols nationwide.

In Michigan, armed protesters began gathering outside the State Capitol in Lansing on Sunday. About 20 protesters, among them members of the anti-government Boogaloo movement, were seen outside the statehouse just after noon – with the numbers expected to grow.

At around 3pm, however, many of the protesters began to leave the area. At its peak, there were about 100 armed protesters, though they were outnumbered by police from several departments, the National Guard, and members of the news media, according to the Lansing State Journal.

‘It has all stayed peaceful,’ Lansing Mayor Andy Schor said.

‘That’s tremendous … to make sure that people could exercise their first and second amendment rights without any violence or conflict.’

The small group of demonstrators, some armed, stood near a chain-link fence surrounding the building as state police walked the grounds and National Guard vehicles were parked nearby.

Washington, DC, police said they noticed Guy Berry, 22, of Gordonsville, Virginia, walking on the 200 block of Massachusetts Avenue NE just after midnight on Sunday with a gun ‘clearly visible’ in a holster.

When he was questioned, police determined that Berry was legally permitted to carry a handgun in the District of Columbia. He was arrested and charged with carrying a pistol without a license, possession of a large-capacity ammunition feeding device, and unregistered ammunition.

A day earlier, Linda Magovern, 63, of Stratford, Connecticut, reportedly approached US Capitol Police officers at an inauguration checkpoint on First and Columbus Circle in Northeast Washington, DC, at around 8:45am.

According to police, Magovern showed officers a military police challenge coin while claiming that she was part of law enforcement and a member of the presidential cabinet.

Police then instructed Magovern to put her car in park and turn off the engine, according to WUSA-TV.

When one of the officers asked Magovern to show her driver’s license, she allegedly began driving forward.

Officers then repeatedly asked her to stop the vehicle.

Magovern is then alleged to have fled northbound on Columbus Circle. She was eventually stopped in front of 50 Massachusetts Avenue and arrested.

She has been charged with impersonating a law enforcement officer and fleeing from police.

Before she was booked by Capitol Police, Magovern was taken to United Medical Center in Washington, D.C. for evaluation.

Police and National Guard troops stood sentry at newly fortified statehouses Sunday ahead of demonstrations planned for the leadup to Biden’s inauguration, as authorities worked to deter a repeat of the recent riot that overran the US Capitol.