100,000 Americans are expected to die of coronavirus plague in next month but cases and hospitalizations are slowing across some states – as Fauci says plan to vaccinate 100m in 100 days ‘will work’ 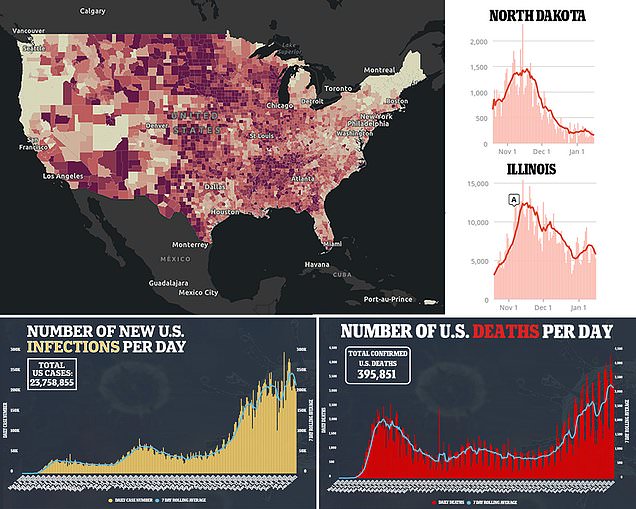 While the US is reporting more than 23.7 million infections and nearly 400,000 deaths in total, some states have seen a decrease in active cases. But others are still grappling with an increase in hospitalizations, cases and deaths.

On Sunday, incoming CDC director Dr. Rochelle Walensky told CBS’ ‘Face the Nation’ that 100,000 deaths can be expected in the month.

‘By the middle of February, we expect half a million deaths in this country,’ she said.

A coronavirus projection from the University of Washington estimates more than 566,000 deaths by May 1 in the US, a figure that could be lowered by thousands with a nationwide mask mandate.

States like North Dakota, which has been under a mask mandate since November, reported significant decreases in COVID-19 cases. Medical professionals have credited the state’s mask mandate for the drastic reduction of infections.

North Dakota Gov Doug Burgum on Friday said mid-November active cases dropped more than 80 per cent, from 10,224 to 1,675; hospitalizations due to COVID have decreased by nearly 74 per cent, to 88 on Friday.

‘Our case numbers and hospital capacity have improved dramatically in North Dakota over the past two months, and with three new tools we didn’t have last fall — vaccines, rapid tests and effective therapeutics — we can see the light at the end of the tunnel,’ Burgum said.

Due to the decline in cases, the Republican governor said he will drop a statewide mask requirement as well as limits on the number of people who gather in restaurants, bars and event venues. The executive order expires on Monday as scheduled.