A nation on edge: All 50 state capitols on red alert as Boogaloo Boys claim they ‘will continue’ their armed rally in DC on Sunday despite 25,000 National Guard troops guarding the Capitol as US braces for inauguration unrest 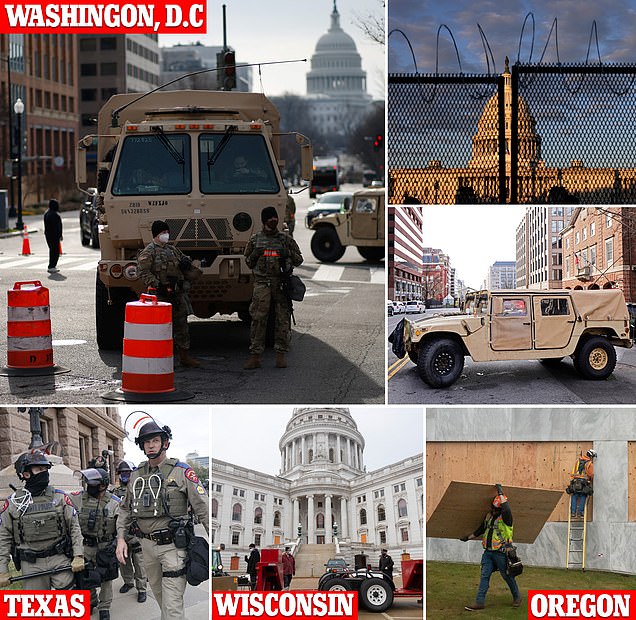 The Boogaloo Boys movement has said it is moving ahead with armed rallies in D.C. and at all 50 state capitols on Sunday despite the National Guard being called in across the country.

It comes amid fears of further violence following the January 6 riot on the U.S. captiol by a pro-Trump mob that lead to the five deaths, with ten states deploying their National Guard to deal with the potential threat.

Texas, Kentucky and Virginia have all closed their state captiols after intelligance warned of a threat from ‘violent extremists’.

D.C. has called in 25,000 National Guard troops to guard the streets in and around the Capitol in the days leading up to the inauguration of President-elect Joe Biden on January 20. They are being joined by patrols by the Washington, D.C. Metropolitan Police Department, the Capitol Police and law enforcement from cities around the country.

There are at least 7,000 troops from dozens of states already on the ground in the nation’s capital with more to arrive in the coming days.

Officials have installed a massive security apparatus around the complex where the inauguration is to take place.

The FBI has also warned police agencies of possible armed protests at all 50 state capitols starting January 16 through January 20, fuelled by supporters of Trump who believe his false claims of electoral fraud.

Michigan, Virginia, Wisconsin, Pennsylvania and Washington are among the states that have activated their National Guards to strengthen security.