Piers Morgan says, ‘If Trump can’t be trusted to tweet he can’t be trusted with the nuclear codes – he’s lost his mind and America needs to get this dangerous, deluded, despicable lunatic out of the White House now’ 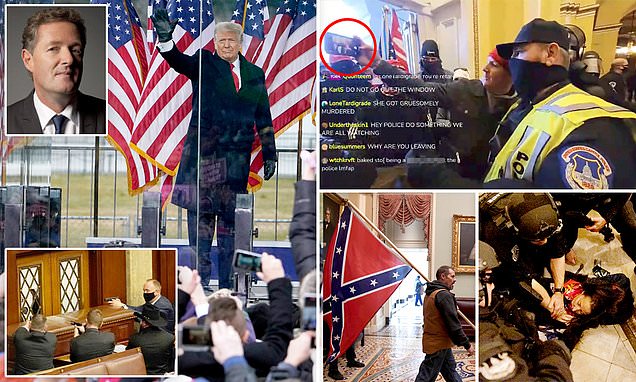 President Trump must be removed from office. As soon as possible. Either through new emergency articles of impeachment, which would have the additional benefit of barring him ever for running for the presidency again. Or, my preferred option, through the 25th Amendment on the grounds of his obvious mental instability. There can be no other appropriate response to the utterly horrific scenes we all witnessed at Capitol Hill yesterday. I honestly couldn’t believe what I was watching as the rioters – or ‘domestic terrorists’ as many are calling them – broke through the flimsy police cordon and raced into the Capitol building. I even saw one police officer pose for a selfie with a rioter (top, right). We were watching an attempted coup in real time, perpetrated by violent, racist extremists in the name of Donald Trump. They were exemplified by what I finally concluded was the most hideous image of all – a rioter arrogantly brandishing a confederate flag inside the Capitol, somewhere it had never been flown before, not even during the Civil War (bottom, right). Four people died in the mayhem including a female rioter who burst through a window into the Capitol building and was shot by a police officer (bottom, far right). Trump’s tolerated such horrendous people before, refusing to properly condemn them after incidents like Charlottesville because he craves their votes. Now he’s stood full-square behind them as they committed an atrocity in his name – and praised them to the world. Such a person should not be President of the United States for a second longer.