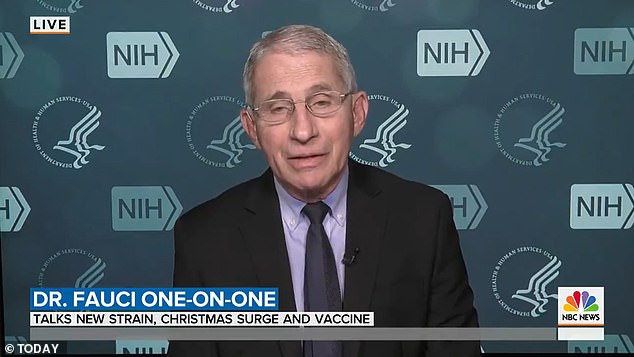 Dr. Anthony Fauci has said spreading out more first doses of the vaccine by using second doses held in reserve is now ‘under consideration’ while Surgeon General Jerome Adams has admitted that public and state health departments ‘are chronically underfunded’ as the nation prepares to dismally fail its 2020 COVID-19 vaccination target when the clock strikes midnight tonight.

The nation’s top health experts who have been at the forefront of the coronavirus pandemic waded into the vaccine rollout chaos Thursday, as both state and federal authorities point the blame at each other.

Fauci admitted on the NBC Today Show Thursday that the rollout of the vaccine has so far been ‘disappointing’ but said the federal government needs to ‘support the local groups, the states and the cities’ to ramp up the pace.

While Adams also admitted state health departments need more funding and resources on Good Morning America Thursday morning, he leaped to defend the federal government’s response saying 20 million doses would be on the ground by next week.

The latest data from the CDC, as of 9 a.m. ET Wednesday, reveals that just 2,794,588 Americans have received the first dose of the jab.

A total of 12,409,050 doses have been administered meaning that roughly 10 million doses are currently sitting in the hands of state health departments rather than in the arms of at-risk Americans.

Trump blasted states Wednesday for the slow rollout, tweeting: ‘The Federal Government has distributed the vaccines to the states. Now it is up to the states to administer. Get moving!’

However, even if states had administered all doses distributed, there would still be a shortfall of more than 7.5 million doses as the federal government has also failed to deliver the target 20 million doses by the end of the year.

With both the federal government and the states missing the target by a long shot, questions are being asked over who is to blame and how the situation can be remedied.