US Braces for Super-Coronavirus Plague Tsunami: Fauci Warns the 70% More Contagious Strain – Which Has Brought UK to Its Knees – Will Now Rip Through America as Two Cases Are Confirmed in California and Colorado 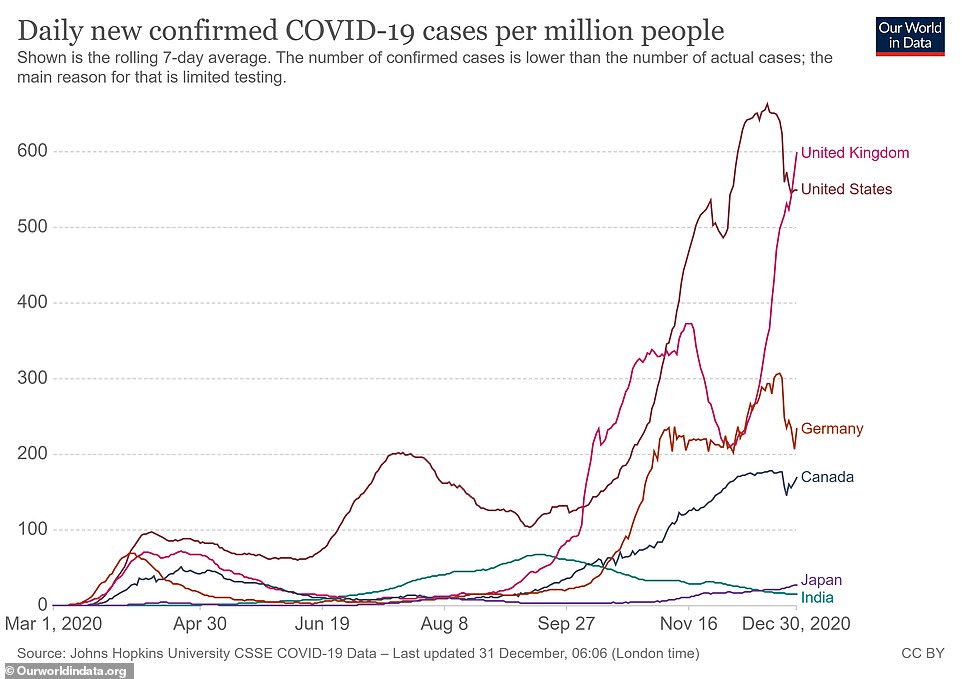 A mutant variant of the coronavirus has been found in both California and Colorado this week sparking fears the more contagious strain will wreak the same havoc in the United States as it has the United Kingdom.

Britain is seeing infections soar and hospitalizations climb to their highest levels on record. London and southeast England were placed under strict lockdown measures earlier this month and dozens of countries banned flights from the country. France also briefly barred trucks from Britain.

The UK on Wednesday recorded its deadliest day since April with 981 COVID fatalities and 50,000 more cases, as another 20million people were plunged into the toughest restrictions in a desperate attempt to control the spiralling second wave.

The percentage of people testing positive for the new variant is increasing in every region across England, data shows, while other variants of the virus either fall or remain steady. There has been a 40 per cent increase in cases in England in the last week alone and almost 15 per cent more patients in hospital.

Now the US must try to curb the same mutant strain which researchers estimate is 50 per cent to 70 per cent more contagious, adding an even more increased sense of urgency to the nation’s vaccination drive against COVID-19, which has killed more than 340,000 people in the U.S.

Dr Anthony Fauci on Thursday told the Today show it is ‘inevitable’ the new COVID-19 strain will spread across the US. He said: ‘We predicted it would be, when you have so much of it in the UK, which then spread to other countries in Europe and Canada, it was inevitable that it would be here.

‘You’ll be hearing reports from other states and more cases in the state that is already reported. Unfortunately, that’s just the reality of the way these viruses spread’. But he added: ‘The good news is that it does not appear to be more virulent, namely, making people more sick and leading to more death.’

California became the second state on Wednesday to report finding the new strain of the virus after Colorado Tuesday. The first reported U.S. variant infection was identified Wednesday as a Colorado National Guardsman who had been sent to help out at a nursing home struggling with an outbreak. Health officials said a second Guard member may have it too.

For the second consecutive day, the US has set a record-high number of coronavirus deaths. On Thursday, the country reported 3,744 fatalities due to COVID-19, data from Johns Hopkins University shows.

This breaks the previous record set on Wednesday of 3,725 and brings the total number of deaths to 342,414. The figure also marks the ninth day this month that deaths have exceeded 3,000, according to DailyMail.com analysis.