WATCH: NYPD Identifies SoHo Karen and May Charge her with Grand Larceny or Attempted Robbery After she Tackled 14-year-old Black Teen Claiming he Stole her Phone

The New York Police Department said Tuesday that they have identified ‘SoHo Karen’ and may charge her with assault, grand larceny or attempted robbery.

On Saturday a white woman who has been dubbed ‘Soho Karen’ approached black jazz artist Keyon Harrold and his 14-year-old son Keyon Jr in the lobby of the boutique Arlo Hotel in NYC’s SoHo and accused the teen of stealing her cell phone.

She pushed and grabbed the two and scratched Keyon Sr’s hands in her fight for the phone, which she wrongly thought was hers. Her phone was reportedly found in an Uber and returned to her by the driver minutes after the squabble.

NYPD tells DailyMail.com says that ‘Karen’ has been positively identified and detectives are trying to locate her and the case is not being investigated as a bias incident.

Chief of Detectives Rodney Harrison said during a press briefing Tuesday: ‘We believe that she lives out of state so we’re trying to ascertain if she’s still within the New York City area.’

Harrison said the case was initially classified as harassment but it has since changed.

‘After we were able to get video, we’re now looking to charge this individual with assault and maybe even look at grand larceny or maybe even attempted robbery,’ he said.

Harrison said that Keyon Jr didn’t suffer any injuries in the incident, but his father was scratched.

‘Our perpetrator initially started a verbal argument of this accusation and then tried to attack our teenager by grabbing for his phone, grabbing his leg and trying to tackle him. Our victim didn’t suffer any injuries. But his father, who he was with, received slight injuries,’ he said during a press briefing.

On Monday the Manhattan District Attorney and NYPD announced they were investigating the incident.

The family’s lawyer Ben Crump is petitioning the Manhattan District Attorney’s office to press charges including assault and battery.

A source close to the hotel told DailyMail.com on Tuesday the manager involved in the incident has been placed on leave pending an internal investigation.

On Tuesday morning Keyon Sr, a Grammy-winning musician, and his son appeared on Good Morning America, where the teen said he feared for his life.

‘I don’t know what would have happened if my dad wasn’t there. These past few days, still kind of shell-shocked, but I’m hanging in there,’ Keyon Jr said on Good Morning America Tuesday.

‘For me I was confused because I had never seen that lady ever and I didn’t know what to do in the moment. That’s why I was happy to have my dad here to help me,’ he said.

An Instagrammer last seen in a photograph on Instagram at the hotel six days ago has since posted a denial that she is the ‘Karen’ after being bombarded with abuse on social media accusing her of being the woman in the video.

Cassandra Medina, a registered nurse from Staten Island, posted a message on her Instagram Sunday saying: ‘I’ve been tagged all morning in this video and this is not me.It’s not ok to be falsely accused on social media and I wouldn’t want that happening to anyone.’

She then addressed Harrold in her post, saying: ‘I hope you find truely (sic) who this person is because what she did is disgusting and this hotel should be held accountable.’

On Tuesday GMA host TJ Holmes asked Keyon Jr why he thinks the woman accused him and physically came after him.

‘I think it’s because for me, I was a threat to her, and I think she was scared, so that’s why when she saw me she like jumped on me and attacked me,’ Keyon Jr said.

His father said the woman was ‘all on him asking him for his phone immediately.’

After video of the incident cut off she ‘basically tackled, she scratched me.’

Keyon Jr’s mother Kat Rodriguez revealed she feared for her son’s life when she heard about the incident.

‘For me, fear. Fear came in because my son, if his father wouldn’t have been there, what would’ve happened to my son if the cops had been called? As a mother, when my son asks me “Why me, mom,” it just hurt,’ she said.

‘The toughest answer that a parent has to give their child – “Son, unfortunately, it might be because you’re black. You’re no longer seen as a child,”‘ she added.

She says she wants to hear SoHo Karen’s side to understand why she launched the attack.

When asked if he feared for his life in the attack, Keyon Jr said ‘Yes.’

‘I think because if you’re by yourself, right? And you have no one to help you and you have no proof and it was just me by myself, it would have been a different story,’ Keyon said. 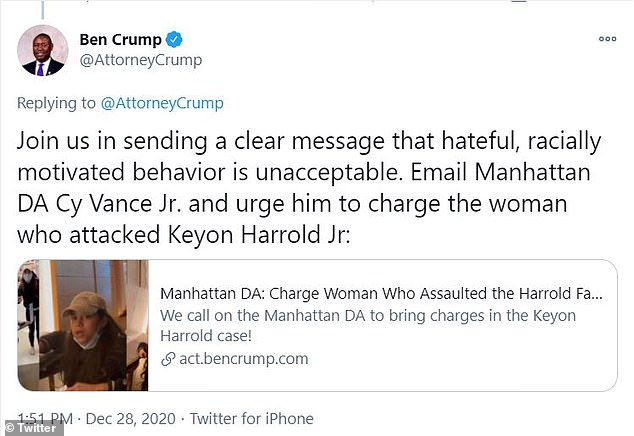 ‘We want charges because we have to send a message because this has larger societal implications. Think about how many black men have been accused by these Karens and they end up losing their liberty and losing their life sitting in prison,’ attorney Ben Crump said on the morning show.

‘We have a petition for the Manhattan District Attorney Cy Vance Jr to bring charges against this woman for assault and battery,’ he added.

Keyon was asked what he would say to the woman if he had the chance.

‘At first I would expect an apology and two I would ask her why would she do something like this to a kid who has never met you at all. I would just ask, just why,’ he said.

Arlo Hotels apologized for the ‘recent incident of baseless accusation, prejudice, assault against an innocent guest of Arlo hotel’ on Instagram.

‘No Arlo guest – or any person – should be subject to this kind of behavior. We want to apologize to Mr. Harrold and his son for this inexcuseable experience, and have reached out to them directly to express our sincere regret and to offer help in dealing with the traumatic event,’ the statement said.

Harrold shared the clip on Instagram saying the woman had checked out of the hotel on December 23, three days before the Saturday incident, and her phone was eventually returned by an Uber driver minutes after the confrontation.

The one-minute-long video shows the woman and the hotel manager in the lobby with Harrold recording on his cell phone.

‘This is my phone,’ Harrold’s son, who is not seen in the footage, is heard telling the woman and the manager.

‘You don’t have to explain nothing to her,’ Harrold tells his son.

The woman then points to the phone and tells the manager that the case is the same one that she has.

Harrold responds to the woman, saying: ‘Are you kidding me? You feel like there’s only one iPhone made in the world?’

When the woman asks Harrold to see the phone, he replies: ‘No, get a life.’

Harrold then tells the woman that she should use the Find My app, which helps locate missing Apple devices.

The woman then tells Harrold that the Find My app can only be accessed through the phone.

The video then shows the manager approach Harrold’s son asking him to see the phone.

‘No, you can’t,’ Harrold tells the manager.

During the exchange, the woman continues to encourage the manager to retrieve what she believes is her iPhone.

Harrold tries to plead his case, saying it wasn’t plausible that his son would have someone else’s phone since he just got to the lobby from the elevator.

‘Didn’t you see me just come downstairs out of the f***ing elevator?’ Harrold tells the manager.

Harrold replies: ‘My son has nothing to do with her.’

The woman once again repeats her demand to see the phone, saying: ‘No, he’s not leaving. Show me the proof.’

Harrold refuses and begins to walk away from the lobby toward what appear to be the elevators.

‘You better get on,’ Harrold tells the woman.

The woman, who appears to be highly distressed, walks toward Harrold and his son, saying: ‘No, I’m not letting him walk away with my phone.’

While the video is not clear, the woman appears to lunge toward Harrold and his son.

In the next frame, she is seen on the ground as the manager helps her back to her feet.

‘No, please get my phone back,’ the woman begs the manager.

The video clip ends with the woman once again approaching Harrold in an attempt to get the phone.

Harrold told The New York Times that the woman tackled his son and tried to look into his pockets before being physically separated from him.