Atlanta to Spend $1.6 Million on Private Police Force for Wealthy Suburb – Called ‘the Beverly Hills of the East’ – as Star Mayor Keisha Lance Bottoms Admits She Doesn’t Know How to Stop Crime Wave After 7-year-old Girl Is Shot Dead 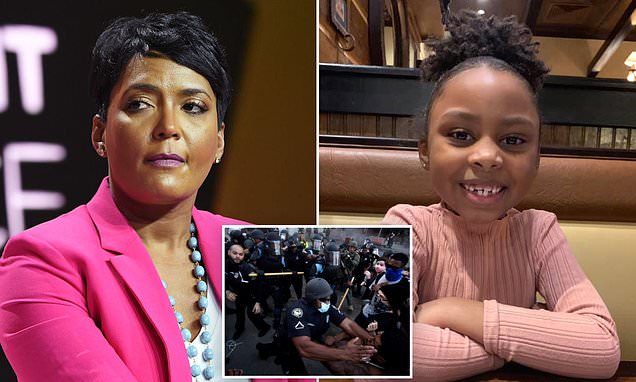 Atlanta city council members have proposed a $1.6million plan to create a private police force in one of its wealthiest suburbs just days after a seven-year-old girl was fatally shot by a stray bullet.

Kennedy Maxie died from her injuries on Saturday night, five days after she was shot in the back of the head while riding in a car with her aunt and mother in Buckhead, Georgia.

The young girl had just finished Christmas shopping with her family at the Phipps Plaza mall in the affluent Atlanta suburb, also known as the ‘Beverly Hills of the East,’ when several men in a nearby parking lot got into a fight that led to gunfire.

Police have been examining surveillance footage from the scene in an attempt to identify a suspect, but no arrests have been made so far.

Kennedy’s death marked the 155th homicide victim in Atlanta this year – the highest total since at least 1998, according to the Atlanta Journal Constitution.

In response, a number of Atlanta city council members on Monday announced they were allocating $125,000 to fund the ‘Buckhead Security Plan’, which intends to establish a private security force in the area to supplement the Atlanta Police Department, NBC reported.

The proposal, which has also been backed by the police department, the Atlanta Police Foundation, members of the Fulton County Commission, and a member of Mayor Keisha Lance-Bottoms’ administration, aims to increase public safety using law enforcement officers from local and state agencies.

The plan is divided into two major categories, the first being ‘Deterrence & Enforcement,’ which seeks to install more license plate readers and cameras to cover all major intersections in the neighborhood.

It also calls for a coordinated security patrol which would consist of extra-duty officers from the APD, the Fulton County Sheriff’s Office and private security firms, according to the website.