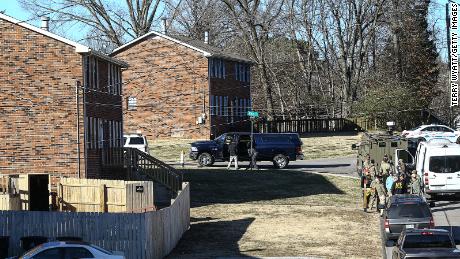 (CNN)Investigators looking into the Christmas morning explosion in Nashville now believe the blast was likely the result of a suicide bombing, according to two law enforcement sources with direct knowledge of the investigation.

Officials have previously said they have recovered human remains at the scene of the bombing in downtown Nashville and an FBI official on Saturday said agents are not looking for another suspect.
Agents are also at a home in Antioch, just southeast of Nashville, to conduct “court-authorized activity,” FBI spokesman Jason Pack told CNN. According to a law enforcement official, a tip about the vehicle involved in the explosion on Christmas morning led law enforcement to the Antioch home.
Bomb technicians have cleared the house to ensure it is safe for an evidence team to enter, Pack said. Investigators are now waiting for the evidence team to arrive and enter. Pack would not confirm who lives at the house, but neighbor Steve Schmoldt told CNN that his wife noticed law enforcement trucks last night in the neighborhood.