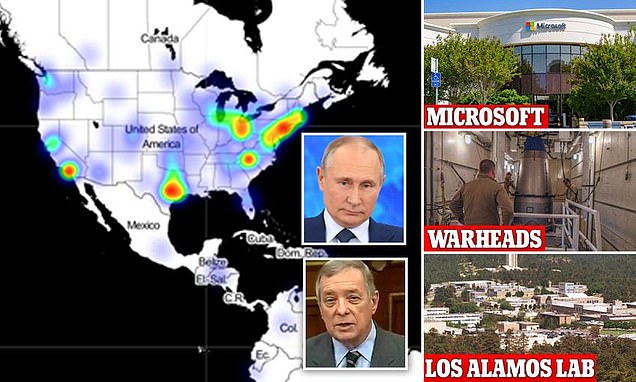 Microsoft says it has already identified at least 40 government agencies and companies targeted in the suspected Russian hack that breached US nuclear agencies in what is being described as the biggest attack in American history.

The software titan said that 80 percent of the victims it has uncovered so far are in the United States and warns that number will rise ‘substantially’ as the scope of the sprawling attack continues to unfold.

A heat map of infections released by Microsoft, which has helped respond to the breach, shows that those infiltrated by the hackers are spread out across the US with agencies, companies and think tanks in New York, Washington DC and Texas among the hardest hit.

Microsoft, who confirmed that the UK, Israel, Canada and the United Arab Emirates were also in the cross hairs, has not revealed the names of those infiltrated by the hackers but said nearly half were tech companies.

The two US agencies responsible for maintaining America’s nuclear weapons stockpile have already said they were compromised in the attack. The attack also breached the Pentagon, FBI, Treasury and State Departments.

Federal authorities are increasingly alarmed about the long-undetected intrusion with the nation’s cybersecurity agency warning it poses a ‘grave threat’ to government and private networks.

One US official has already described the attack as the ‘worst hacking case in the history of America’.