America has the deadliest day of the plague: 3,700 people die in 24 hours, a record over 110,000 are hospitalized and a quarter of a million more people are infected as states are warned they may get fewer vaccine doses

The US set a new record for coronavirus deaths reported in 24 hours with more than 3,700 on Wednesday amid troubles with the vaccine rollout.

The harrowing tally from Johns Hopkins University marked the fourth time daily deaths have exceeded 3,000 throughout the pandemic. All four have occurred in the last week.

Hospitalizations also set a new record on Wednesday with 113,069. The number of people hospitalized has exceeded 100,000 for 15 days in a row, with daily increases every day since December 5.

More than 230,700 new cases were reported – an increase of more than 41,000 from Tuesday’s tally. The total case load of more than 16.87 million represents roughly five percent of the US population.

The latest statistics followed several hiccups in the distribution of Pfizer’s COVID-19 vaccine, including the first allergic reaction to an inoculation in the US reported in Alaska on Wednesday, and the manufacturer’s announcement that it would deliver about 900,000 fewer doses next week than are set to ship this week.

The Iowa Department of Public Health announced that federal officials had decreased the state’s allocated doses by 30 percent on Wednesday evening. Alabama and California also had their supplies cut short after four trays of the vaccine – each with about 975 doses – were recalled by Pfizer because they were too cold. And Florida Gov Ron DeSantis on Tuesday said that shipments of hundreds of thousands of doses had been delayed due to ‘a production issue with Pfizer.’

In more positive news, the Food and Drug Administration reportedly informed states that Pfizer overfilled vials of its vaccine by up to 40 percent, allowing more people to be vaccinated if clinicians use every drop in the tiny glass bottles.

The apparent mistake means Pfizer is shipping enough vaccine to give 4.06 million Americans their first dose, instead of the intended 2.9 million doses, according to Politico. 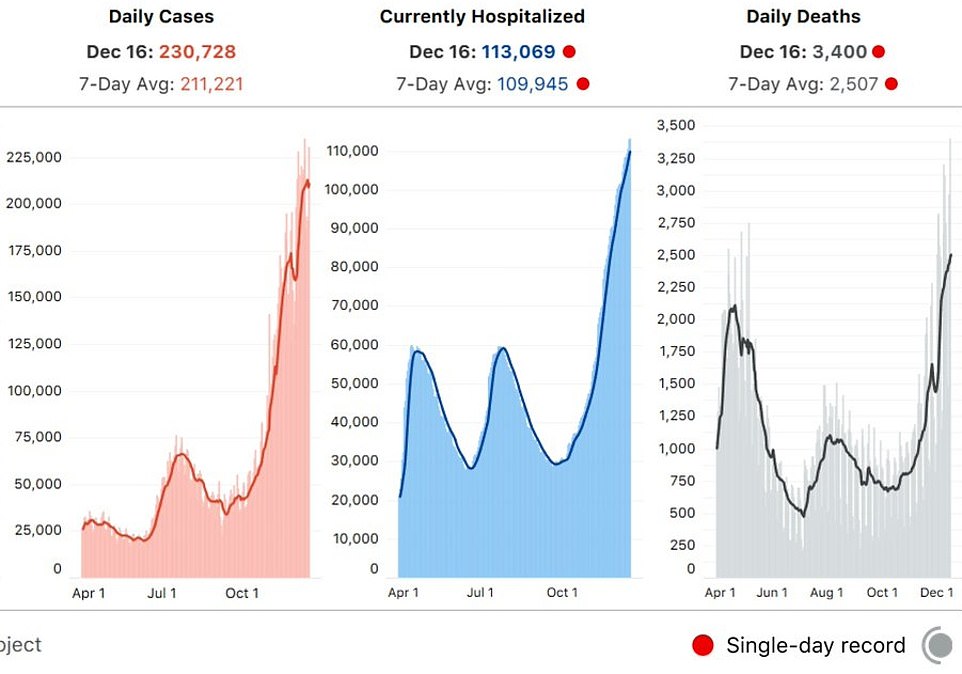 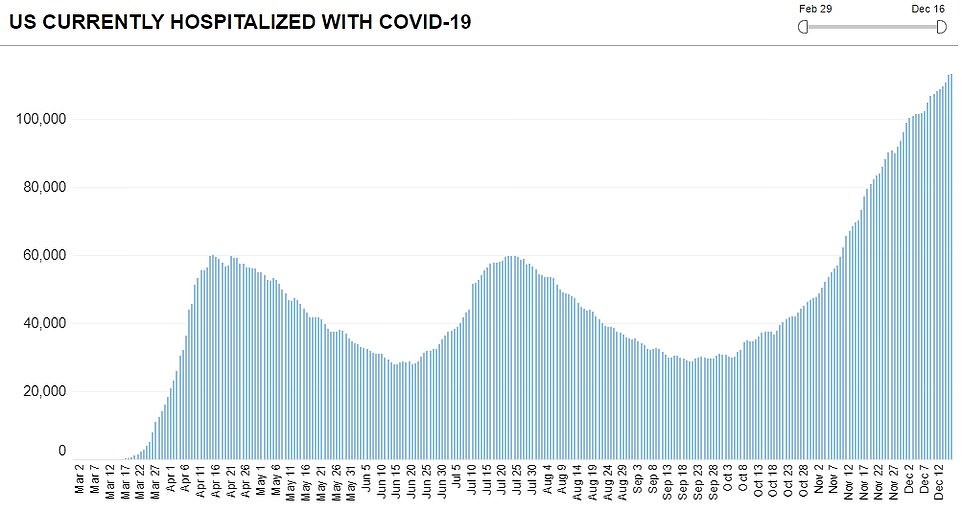 In other COVID-19 news today:

California set a new record for daily new cases and deaths with 53,711 and 293, respectively
The seven-day average for deaths is rising in 23 states: Alaska, Arizona, California, Colorado, Delaware, Idaho, Kansas, Louisiana, Maryland, Minnesota, Mississippi, Missouri, Montana, Nevada, New Hampshire, New Jersey, New Mexico, New York, Oklahoma, Pennsylvania, South Carolina, Virginia and Vermont
Rollout of the first tranche of 2.9 million doses Pfizer Inc and German partner BioNTech SE’s vaccine continued for a third full day, with shipments headed to 66 more distribution hubs nationwide
Companies shipping the vaccines vowed that a powerful winter storm moving into the East Coast would not disrupt distribution
Reports claimed Vice President Mike Pence is planning to get a vaccine at the White House on live TV on Friday in order to boost Americans’ confidence in the shot
Dr Anthony Fauci urged Americans not to see their children at Christmas and said he won’t be spending the holidays with his adult daughters for the first time since they were born
Lawmakers said they were nearing a long-elusive bipartisan deal on $900billion in economic relief

The new seven-day average for deaths in the South reached an all-time high on Wednesday with 1,053, accounting for 31 percent of total US deaths, per COVID Tracking Project data.

The seven-day average for deaths is now rising in 23 states, with 16 states reporting higher rates of deaths per one million people than the summer peak in Arizona.

California reported a record-shattering 53,711 new cases and 293 new deaths on Wednesday. That single-day case count is 50 percent higher than reported in any other state over the course of the pandemic.

The state – America’s most populous with over 39.5 million residents – is now averaging more than 35,000 new cases per day – a rate higher than most countries in the world, including the United Kingdom, Germany and India.

Health officials estimate 12 percent of those cases – 4,200 – end up hospitalized.

Hospitals are filling up so fast that officials are rolling out mobile field facilities and scrambling to hire doctors and nurses, while the state is distributing 5,000 body bags mostly to the hard-hit Los Angeles and San Diego areas and has 60 refrigerated trailers standing by as makeshift morgues.

Most of the state’s residents are under a stay-at-home order because of dwindling intensive care unit capacity where they live. Los Angeles County has 2,500 ICU beds but within a month could easily need far more, said Dr. Christina Ghaly, the county’s health services director.

‘Hospitals are under siege and our models show no end in sight,’ she said. 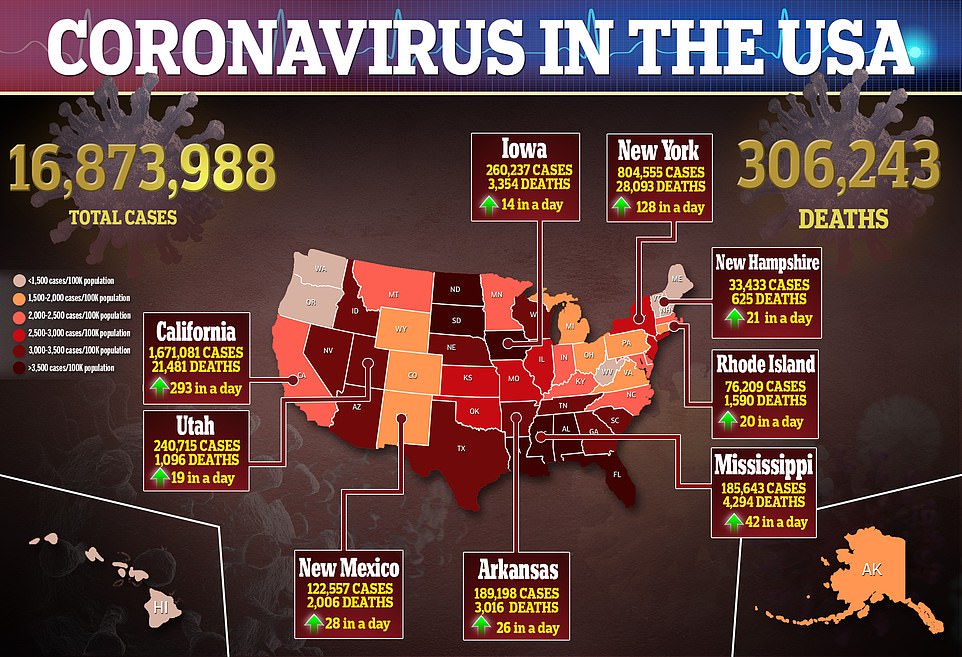 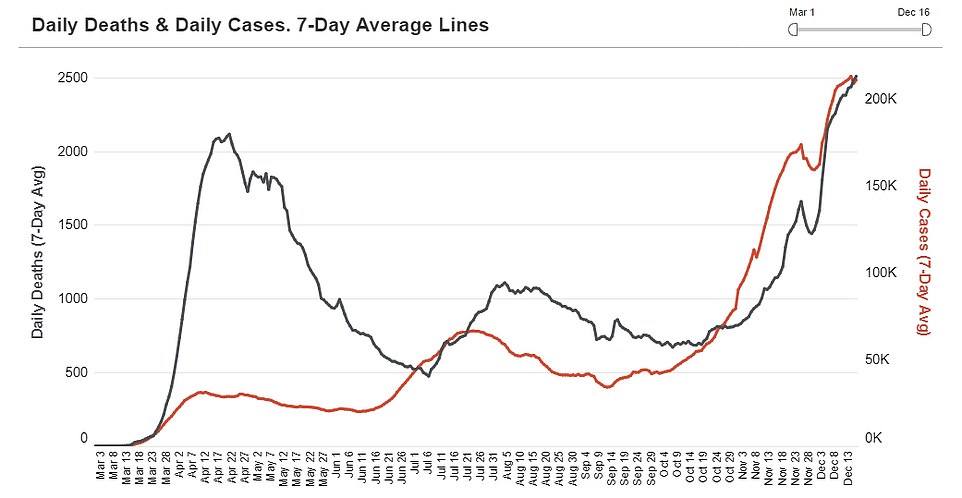 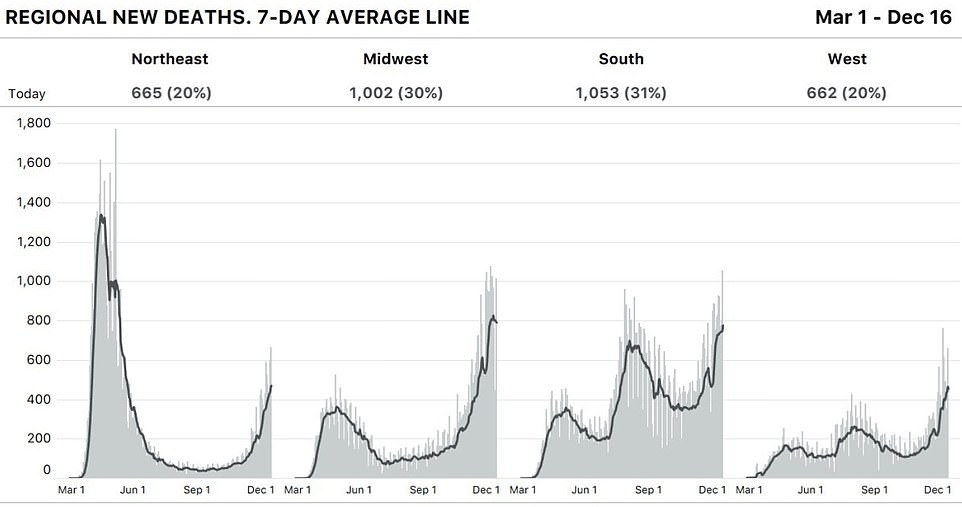 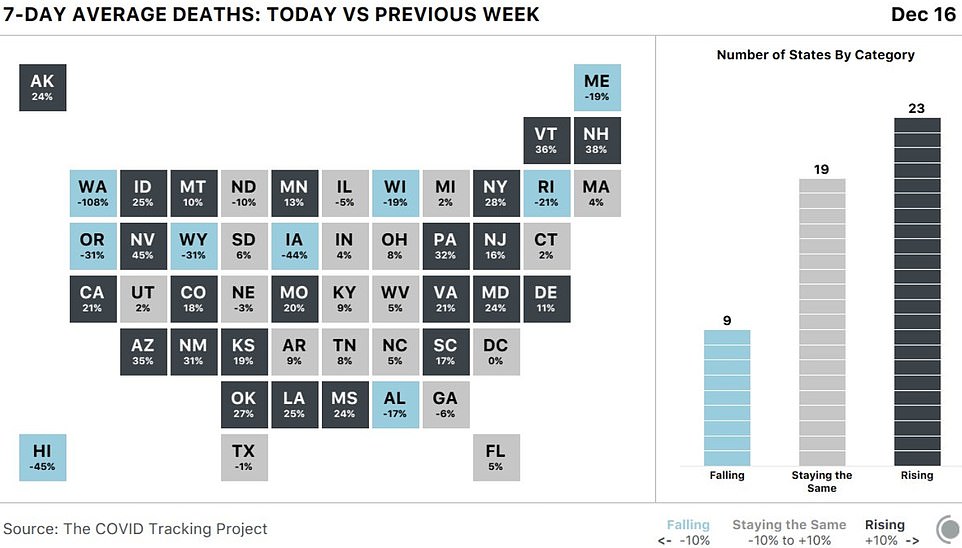 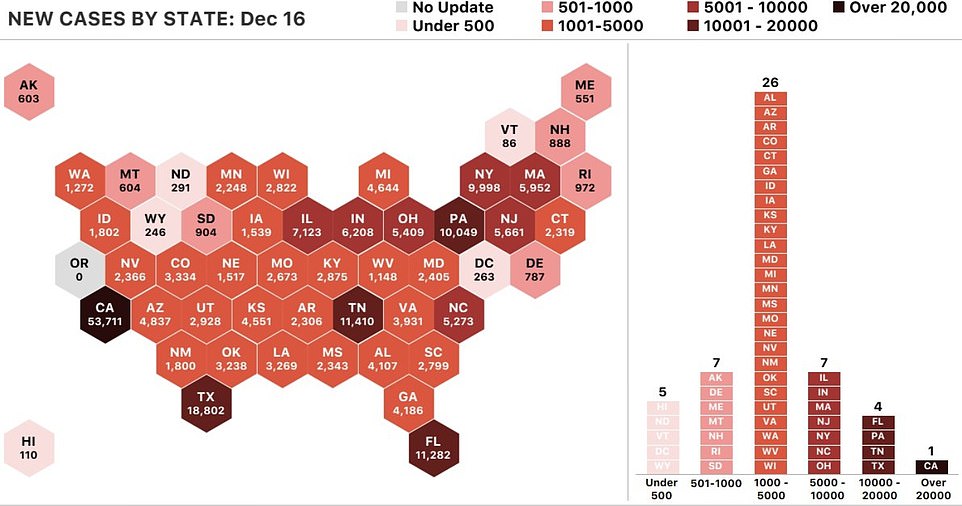 In the face of ongoing surges in cases, deaths and infections, the US government has been scrambling to distribute the first tranche of 2.9 million doses of the vaccine from Pfizer Inc and German partner BioNTech SEUS, which received the green light from the FDA less than a week ago.

A second vaccine from Moderna Inc could win emergency-use approval from the FDA this week.

The Pfizer rollout was expanded on Wednesday with shipments headed to 66 more distribution hubs nationwide, even as a major winter storm threatened to slow progress on the East Coast.

Express delivery companies FedEx and UPS, sharing a leading role in vaccine shipments, said they were monitoring the potential impacts of heavy snow and ice that had begun to disrupt transportation systems along the Eastern Seaboard on Wednesday.

US Army General Gustave Perna, overseeing the government’s Operation Warp Speed vaccine campaign, said FedEx and UPS have developed strategies for bad weather, including plans to keep any delayed vaccine shipments secure until they can be ‘delivered the next day’.

‘We are on track with all the deliveries we said we were doing,’ Perna told reporters at a briefing.

Some 570 other vaccine distribution centers received the bulk of the initial batch of shipments on Monday and Tuesday, and an even larger wave was due for delivery to 886 additional locations on Friday, Perna said.

From each distribution site, vaccine doses were divvied up among area hospitals and administered to healthcare workers, designated as first in line to be immunized. Some were also going to residents and staff of long-term care facilities. Later vaccine rounds will go to other essential workers, senior citizens and people with chronic health conditions.

President-elect Joe Biden, who has said he would get the vaccine publicly to help instill confidence in its safety, is expected to receive his first injection as soon as next week, according to his transition team. 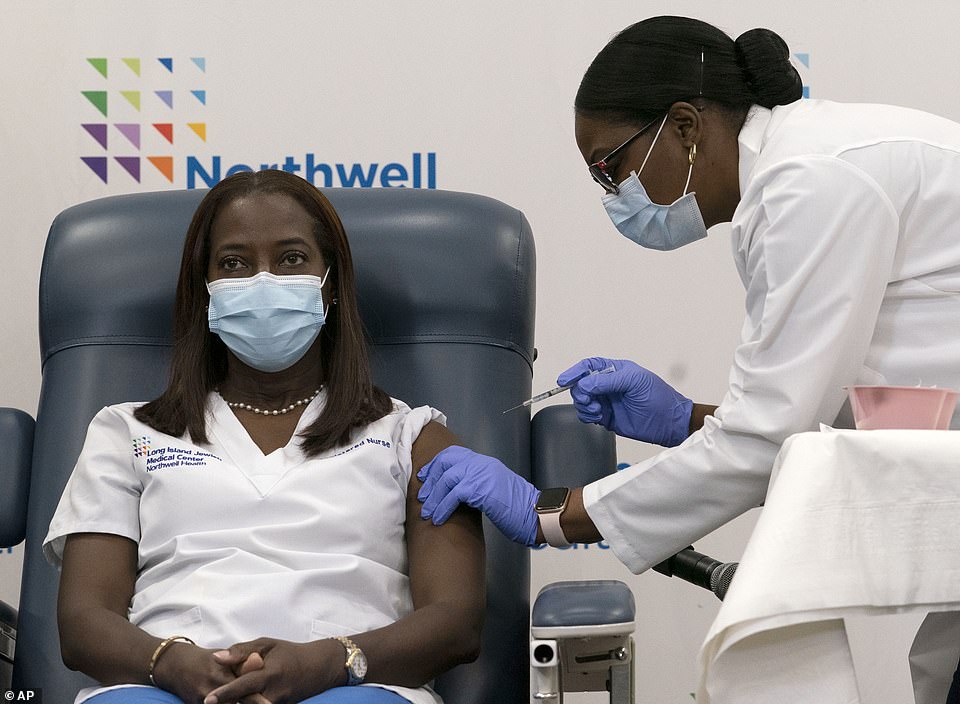 It will take several months before vaccines are widely available to the public on demand, and opinion polls have found many Americans hesitant about getting inoculated.

Political leaders and medical authorities in the meantime have launched a media blitz assuring Americans that the vaccines are safe while urging them to avoid growing weary of social distancing and mask-wearing while the pandemic rages on.

‘It is not over yet,’ Dr Anthony Fauci, a member of the White House coronavirus task force, told CBS News on Wednesday. ‘Public health measures are the bridge to get to the vaccine, which is going to get us out of this.’

Data shows surging COVID-19 infections and hospitalizations are driving healthcare systems to the breaking point across much of the country, with many intensive care units at or near capacity.

Health experts have warned the death toll will rise higher still in the weeks ahead, even as the vaccine campaign steadily expands.

In all, the United States had options to buy up to 300 million doses of those vaccines, Azar said, plus hundreds of millions more doses of vaccines that have yet to receive approval, including some single-dose drugs.

The US could have a surplus supply of vaccines in the future, if all the vaccines it has secured are authorized for use, Azar said, which could eventually benefit other countries. 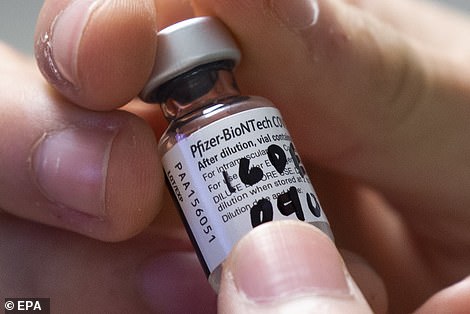 FDA reveals vials of Pfizer’s vaccine contain extra doses that could be given to 6.86 million Americans by Christmas

Pfizer overfilled vials of its coronavirus vaccine by up to 40 percent, meaning more people can be vaccinated if clinicians use every drop in the tiny glass bottles, according to Politico.

That means Pfizer is shipping enough vaccine to give 4.06 million Americans their first dose, instead of the intended 2.9 million doses.

And the FDA is says that the leftover vaccine can be used, a spokesperson told Politico.

‘Given the public health emergency, FDA is advising that it is acceptable to use every full dose obtainable,’ the spokesperson said.

It’s most likely not a mistake on the drugmaker’s part; vaccine vials are commonly over-filled by manufacturers to account for spills or other user errors.

Unfortunately, some pharmacists have already thrown away the extra precious drops of vaccine.

For those that didn’t toss the dregs, pharmacists have found between one and two extra doses worth of vaccine in the vials. 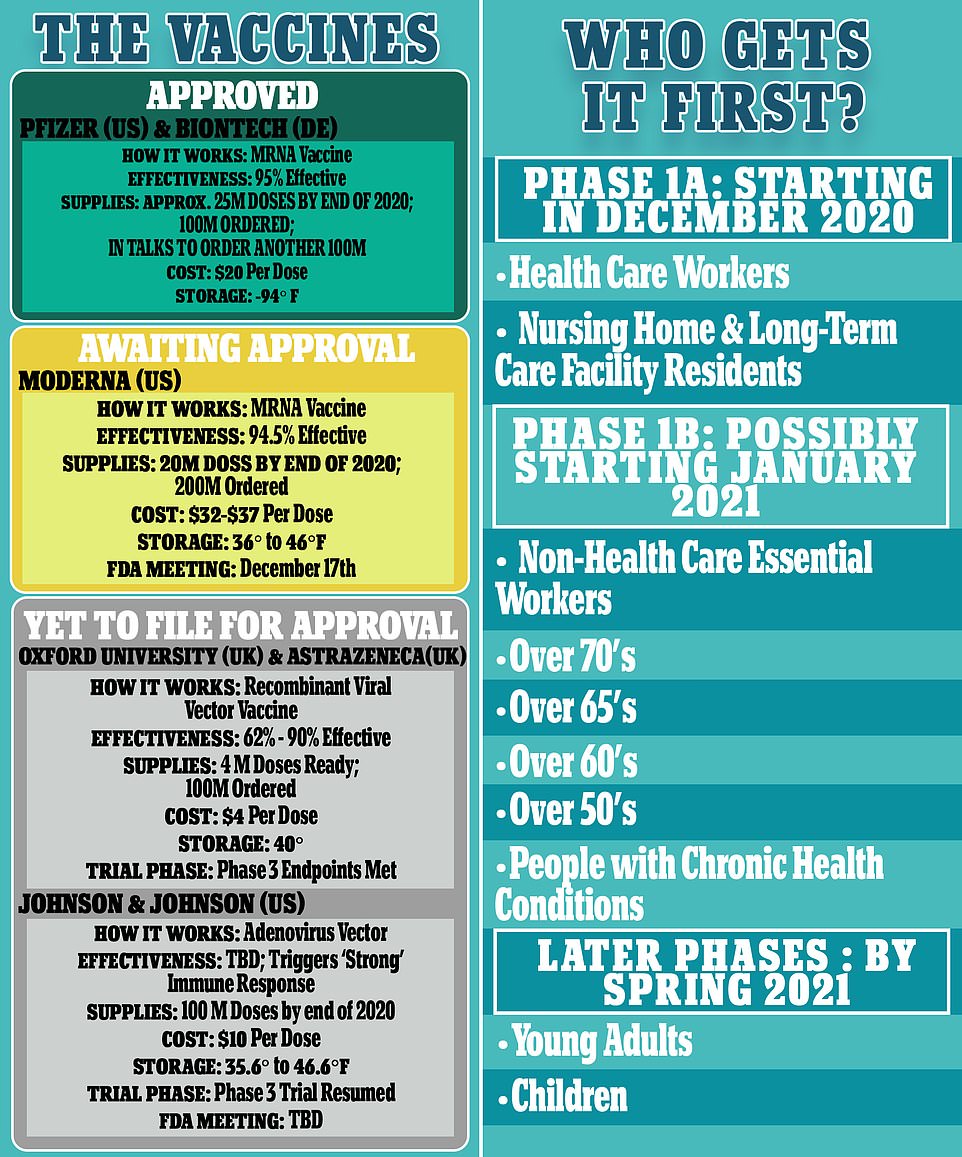 A vial of Pfizer’s vaccine is labelled to contain five doses.

But each may actually have enough of the serum to vaccinate six or even seven people with their first dose.

That could be a major boon for the rollout of vaccines.

Pfizer cut its global supply aim for the end of the year from 100 million to 50 million.

It is shipping 2.9 million doses this week, and another two million – considerably fewer than the first wave – next week, Operation Warp Speed officials said Wednesday.

But neither Pfizer nor the US government have specified exactly how many of its 50 million global doses will go to Americans by the end of the month.

The federal government is working with Pfizer to find fixes to these issues, but it’s unclear how the vaccine rollout might be affected.

The Trump administration also missed out on a chance to buy more doses of the shot, offered by Pfizer over the summer.

In the meantime, Pfizer’s short-term production is key to meeting the US government’s goal of vaccinating 20 million Americans before the end of the year.

Pfizer and Moderna have both made two-dose shots.

To do that, it will need all 20 million doses promised this month by Moderna – assuming its vaccine is approved this week by the FDA – and 20 million more from Pfizer.

According to Politico, the FDA notified Pfizer about the reports of extra doses, and sent guidance to states on Wednesday, telling them it’s okay to use the extra vaccine.

But some states, like Utah, are telling pharmacists to use just the originally prescribed five doses from each vial.

Federal regulators have not yet publicly announced the updated guidance encouraging the use of extra vaccine.

If the vials slated to ship out next week contain as much extra vaccine as this week’s do, there could be enough of Pfizer’s shot to give 6.86 million Americans their first dose of the Pfizer shot by Christmas, instead of just 4.9 million.