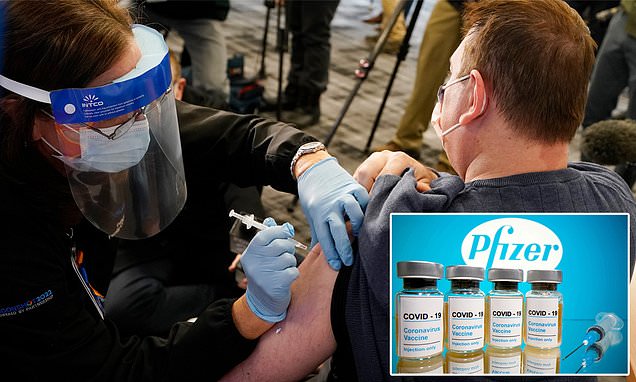 At a news conference on Wednesday, officials said the woman, who remains unarmed, started flushing and experiencing other signs of an allergic reaction after getting the jab at Bartlett Regional Hospital in Juneau.

She was hospitalized and remains stable in the ICU with expectations to be discharged later today.

The woman has no history of allergies, according to a statement from the Alaska Department of Health and Social Services.

Dr Jay Butler, the Centers for Disease Control and Prevention’s (CDC) deputy director for infectious diseases, says this is the only allergic reaction reported in the country thus far.

No national tally is available, but a crude estimate based on the few states that have begun to release their vaccination data – New York, Michigan and Idaho – would suggest that thousands of Americans have been vaccinated.

The allergic reaction is believed to be similar to the anaphylactic-like reactions suffered by two healthcare workers in Great Britain, both whom have since recovered, after they were given the Pfizer-BioNTech SE vaccine last week.

With hundreds of thousands of Americans expected to be dosed in the U.S. over the next few weeks, health officials will be on high alert to see if any other recipients experience severe reactions.