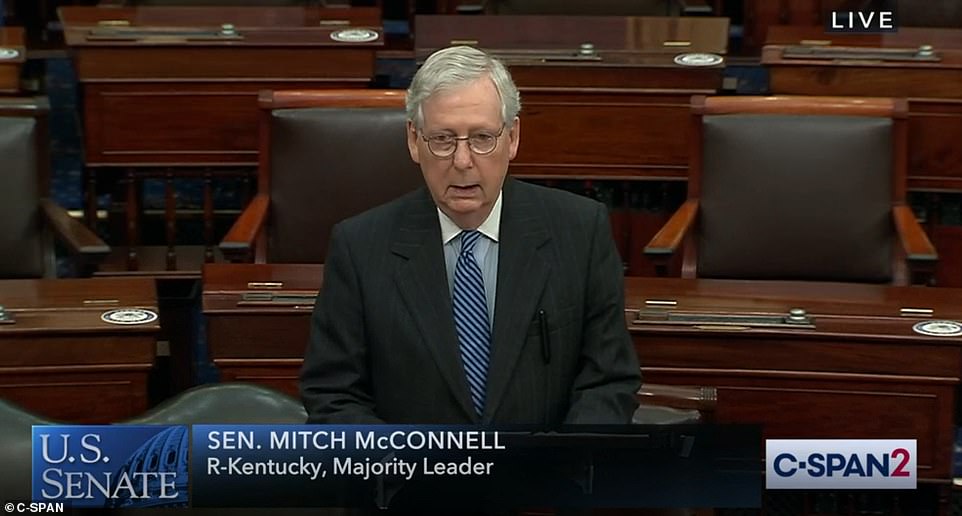 Mitch McConnell declared Joe Biden president-elect Tuesday for the first time, saying ‘the Electoral College has spoken’ and ending any hope Donald Trump had that establishment Republicans will fight to overturn his defeat.

‘Yesterday electors met in all 50 states,’ McConnell said from the Senate floor on Tuesday. ‘So as of this morning our country has officially a president-elect and a vice president-elect.’

‘Many millions of us had hoped the presidential election would yield a different result,’ he continued. ‘But our system of government has processes to determine who will be sworn in on January 20.

He added: ‘The Electoral College has spoken. So today I want to congratulate President-elect Joe Biden.’

Biden confirmed to reporters that he spoke with McConnell on the phone Tuesday and thanked him for congratulating him on his remarks.

‘I had a good conversation with Mitch McConnell today,’ Biden said before departing for a campaign rally in Georgia for the Senate runoff elections. ‘I called him to thank him for the congratulations.’

He added: ‘I told him although we disagree in a lot of things, there’s things we can work together on.’

Before issuing his congratulations to Biden and vice president-elect Kamala Harris – who currently serves as a Democratic senator to California – McConnell spoke for eight minutes of President Donald Trump’s achievements in his four years as president.

‘Tremendous evidence pouring in on voter fraud. There has never been anything like this in our Country!’ he posted.