A critical care nurse who has treated COVID-19 patients in New York City tirelessly for nearly 10 months became the first person in the US to receive the vaccine Monday as part of a campaign to immunize front-line health care workers.

Sandra Lindsay, a nurse and the director of patient services in the intensive care unit at Long Island Jewish Medical Center, received the shot at the Queens facility shortly before 9:30am this morning.

Onlookers were heard breaking out into applause as the shot was administered to the 52-year-old’s left arm, a historic moment that was streamed live as part of a news conference with New York Gov. Andrew Cuomo.

‘I’ve been hopeful today. Relieved,’ Lindsay said after receiving the vaccine. ‘I feel like healing is coming. I hope this marks the beginning of the end in a very painful time in our history.’ 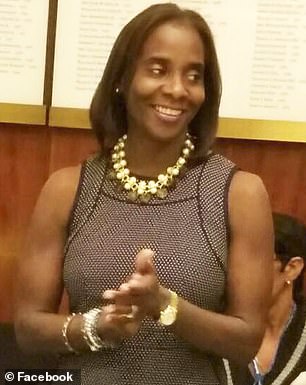 Lindsay, who has more than 26 years of experience as a medical professional, was born and raised in Jamaica West Indies. She immigrated to the United States in 1986 to further her education in nursing.

The 52-year-old first obtained her Bachelors of Science degree in nursing from St. Joseph’s College, in Brooklyn, before going on to get her Master’s in the field from the Bronx’s Herbert Lehman College.

Lindsay first began working as a student nurse at the famed Lenox Hill Hospital, located on Manhattan’s Upper East Side, in 1994.

In 2011 she was selected as a ‘top talent’ as part of North Shore Health’s High Potential Employee program.

She later became a nurse manager at the hospital, and was responsible for the daily operations of her unit as well as leadership, guidance and motivation to a ‘diverse staff of over 60 employees’, according to profile by New Yorkers for Children.

Lindsay left that position in March 2016 to work as Director of Patient Care Services in the critical care department of Long Island Jewish Medical Center.

Her brother, Garfield Lindsay, beamed with pride on social media that his ‘champ’ of a younger sister was the first American to receive the jab.

‘So proud of my younger sis for stepping up and taking the COVID-19 vaccine like a champ,’ Garfield Lindsay posted on Monday morning. ‘She has witnessed firsthand too many deaths and is leading by example by doing what’s necessary to beat this virus. First in the US, I think, so so proud.’ 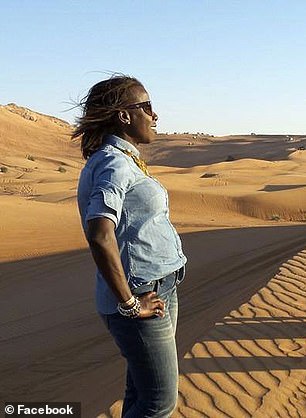 Plaudits for the nurse also came forward in abundance on Twitter.

Vice President-Elect Kamala Harris thanked Lindsay for ‘all you have done for our country’.

Gov. Cuomo, meanwhile, credited Lindsay as showing the world ‘what heroes look like’.

‘Sandra Lindsay, an ICU Nurse at Long Island Jewish Medical Center in Queens, became the FIRST AMERICAN to get vaccinated in a non-trial setting,’ Cuomo wrote. ‘Thank you Sandra and thank you Dr. Michelle Chester. #NewYorkTough’ 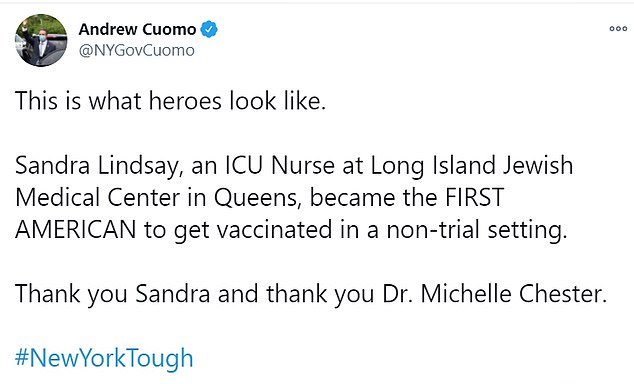 In a press conference staged immediately after her vaccination, Lindsay assured that the Pfizer shot ‘didn’t feel any different from taking any other vaccine.’

‘I want to instill public confidence that the vaccine is safe,’ she told reporters.

Shipments of the frozen vaccine vials began arriving at hospitals around the country first thing this morning so health care workers, as well as nursing home residents, can be the first to receive the shots in a bid to beat the pandemic that has claimed 299,163 American lives and infected more than 16.25 million.