Minneapolis delivers on its promise to defund police and wipes $8 million from force’s budget: Shootings double and carjackings are up 331% on the year as it’s revealed 160 disgusted cops have now quit or taken leave 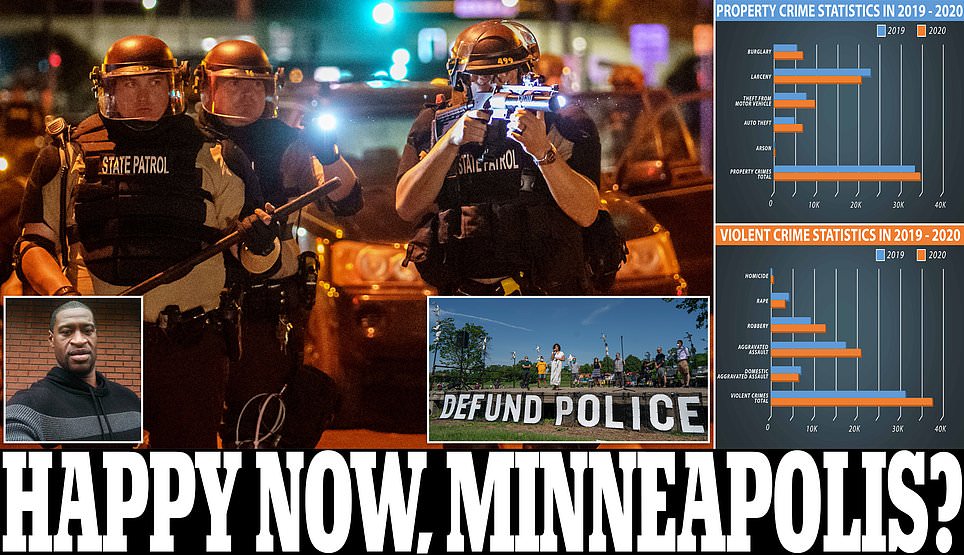 Minneapolis City Council on Thursday approved a controversial budget which is set to move $8million of funding from the police – despite record crime rates since the May death of George Floyd.

Mayor Jacob Frey, who had threatened to veto the entire budget if the council went ahead with a plan to cap police staffing, said the vote was a defining moment for the city which was the first to be hit by anti-police protests following the death of Floyd.

The city has been plagued by soaring violent crime since then – with homicide, robbery, aggravated assault, burglary, theft and arson all up on last year’s figures.

Police have recorded 532 gunshot victims this year as of last Thursday, more than double the same period a year ago.

Carjackings have also spiked to 375 so far this year, up 331 percent from the same period last year. And violent crimes have topped 5,100, compared with just over 4,000 for the same period in 2019.

Around 160 officers are said to have resigned or be on leave from the force compared to the start of the year. That is partly due to officers claiming post-traumatic stress disorder from a summer of unrest — with more preparing to leave amid retirements and poor morale, reports say.

Joe Biden told civil rights leaders that the ‘defund police’ slogan was the reason Democrats experienced widespread losses in congressional races across the country on November 3.

‘That’s how they beat the living hell out of us across the country, saying that we’re talking about defunding the police,’ Biden said during a two-hour closed-door meeting with civil rights leaders on Tuesday, according to audio of the meeting obtained by Bad News.