It is reported that Hillsong did nothing after Carl Lentz was accused of sexual misconduct in 2017, as volunteer detailed his ‘sexual behavior with different women’ and claimed she was ‘extremely uncomfortable’ after he was flirtatious and inappropriate

Disgraced celebrity pastor Carl Lentz was accused of sexual misconduct as far back as 2017 –and Hillsong church leaders knew about it, leaked emails obtained by DailyMail.com reveal.

Lentz, who baptized Justin Bieber, was fired last month after admitting to cheating on his wife of 17 years Laura.

The couple have since moved with their three children to LA, selling off their $1.5 million home in Montclair, New Jersey and renting a beach hideaway for $16k a month.

The 42-year-old, who is attempting to rebuild his marriage, isn’t laying low in the wake of the scandal, instead he’s been spotted all around town – most recently on Thursday. He was photographed stripping off his shirt to tan on the beach while his wife and kids waited to pick up their Japanese takeout order.

Lentz’s firing became public when church founder Brian Houston wrote to members acknowledging ‘a recent revelation of moral failures’ by the pastor, and claimed he fired Lentz as soon as he found out about his infidelity.

But sources have revealed senior church members were warned of Lentz’s ‘inappropriate sexual behavior’ over three years ago.

According to one insider, in July 2017 a Hillsong member wrote to one of the church’s directors on email with allegations that some Hillsong leaders were texting nude photos to female volunteers, and that Lentz had been accused of making one volunteer ‘extremely uncomfortable’ after he ‘acted inappropriately’, was ‘extremely flirtatious’, and ‘has been involved in inappropriate sexual behavior with different women.’

According to the source, the sender, a former Hillsong New York community group leader, sent the email to an executive of the church’s Boston campus.

His email said a former Hillsong volunteer had come forward to him claiming Lentz ‘acted inappropriately’ with her, was ‘extremely flirtatious’ and made her her feel ‘extremely uncomfortable.’

The church group leader said in the email that the whistleblower had spoken in confidence to him, alleging that Lentz had also been involved in ‘inappropriate sexual behavior’ with other women in the megachurch’s backstage area called the Green Room. 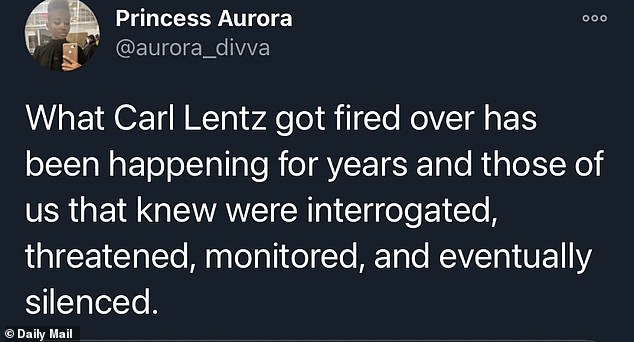 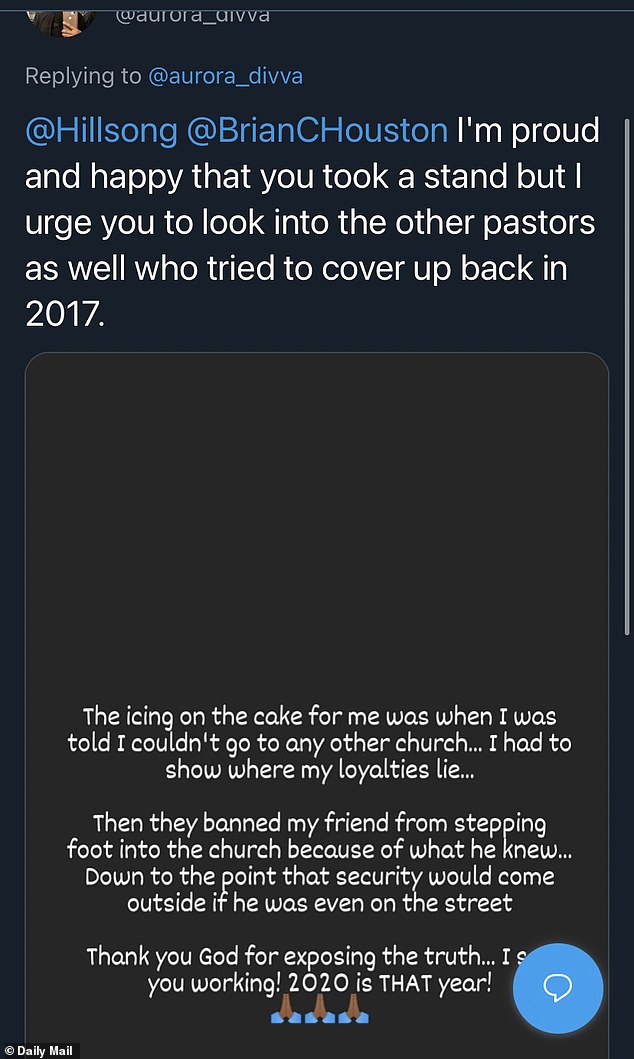 According to the source, who has close links with Hillsong top brass, the email said that when the whistleblower had previously approached church leadership about the alleged sexual misconduct, nothing was done.

A month later a senior member of Hillsong New York wrote a terse email in response, claiming the allegations were all false.

The source claims the email said the New York branch had conducted an ‘internal review’ and found no evidence supporting the claims against Lentz.

The email, according to the source, accused the community group leader of causing ‘more harm than good’ and fostering a ‘false narrative’.

DailyMail.com has been able to verify the content of the emails.

The community group leader later claimed on social media that his group was shut down after he came forward with the allegations.

Another church member, Jessica Inyere, publicly accused Hillsong of interrogating and threatening members who spoke up about sexual misconduct.

‘What Carl Lentz got fired over has been happening for years and those of us that knew were interrogated, threatened, monitored, and eventually silenced,’ Inyere tweeted after Houston’s announcement.

‘@Hillsong @BrianCHouston I’m proud and happy that you took a stand but I urge you to look into the other pastors as well who tried to cover up back in 2017.’

She also posted on Instagram: ‘You know what’s crazy??? My friends and I got kicked out of being CG [Connect Group] leaders because of a scandal related to this! We were interrogated and threatened and later silenced! But you see God, He has a way of handling things!’

A spokesman for the church told DailyMail.com: ‘At the time, our team in cooperation with legal counsel spent five weeks investigating the claims and could find no corroborating evidence for any of the allegations made.

‘For this reason it was not escalated to Pastor Brian at that time. However, our independent investigator is revisiting these allegations, and we await their findings.’

This week DailyMail.com revealed an audio recording of a meeting of church executives and top donors held around November 19, in which Houston revealed allegations that Lentz had ‘more than one affair’ – but claimed he knew nothing about it until days before the scandal emerged.

‘It was more than one affair, they were significant. And at least some bad moral behavior had gone back historically, but not necessarily those affairs,’ Houston said in the recording.

‘I can honestly say before God the first time I heard any moral complaint against Carl was when [Hillsong East Coast Chief Operating Officer Tolu Badders] contacted me.’

The church founder revealed the affairs were discovered when a staffer found ‘compromising’ texts on Lentz’s computer.

‘Tolu had a conversation with one of the staff members, and that staff member had found a very compromising chain of text messages on Carl’s laptop or computer. And so that person went straight to Tolu,’ Houston said. ‘And Tolu, to her credit, the first thing she did was call me.’

The Hillsong founder said Lentz was ‘a difficult man to have any kind of direct conversation with, because it was always defensive, it would always be put back on the other person, as though they’re the ones with the problem.’

The comments were less varnished than Houston’s statement to all church members in the wake of the scandal, in which he merely referred to ‘leadership issues and breaches of trust, plus a recent revelation of moral failures’ by the celebrity pastor.

Last month 34-year-old New York City designer Ranin Karim went public claiming she was one of Lentz’s mistresses, and that they had a serious but secret relationship during which he told her he was an unmarried sports agent.

Eventually, Ranin found out who Lentz was, after she ‘had a feeling something was up’.

‘He didn’t tell me that he was married at first, he doesn’t wear a ring,’ Ranin said, adding that she asked him if he was married after a few dates and he confessed to her about his wife of 17 years.

Despite being exposed, they continued their affair until early November.

Other Hillsong members, who asked to remain anonymous, claimed Lentz used women he met backstage at church for affairs.

‘I volunteered at the Green Room (Backstage) at Hillsong NYC for several years before leaving,’ one church member said. ‘Carl Lentz has been sleeping with women outside of his marriage for at least 7 years.

‘I was removed from my Green Room duties after seeing Carl with Kevin Durant and Draymond Green at 1OAK Nightclub the night before.

‘Their table was right next to my promoter’s and he left shortly after noticing me around 2am. Carl was very touchy with someone who was clearly NOT his wife.

‘The next day, when i got to the church I was pulled aside and told I was no longer needed because they have enough people.’

When it all came to light, the church received emails from at least three other women besides Ranin telling their story,’ the Hillsong worshipper claimed.