Jewish Doctor Admits He ‘Hesitated’ Before Treating Coronavirus Plague Patient Covered in Nazi Tattoos and Reveals in That Moment He Realized the Pandemic Has Taken a Toll on Him, Saying: ‘Maybe I’m Not Okay’ 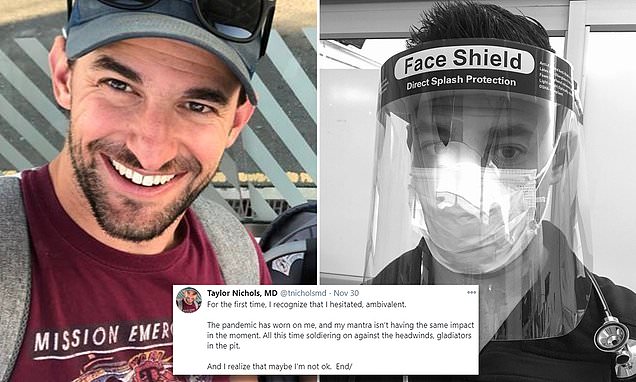 A Jewish doctor in California has revealed how his commitment to saving lives was tested when he was confronted with a COVID-19 patient whose body was plastered with Nazi tattoos.

Dr Taylor Nichols shared his heart-wrenching story in a Twitter thread on Monday that quickly went viral, racking up more than 50,000 retweets.

He was working in the emergency room of Mercy San Juan Hospital in Sacramento in mid-November when an older man arrived by ambulance.

The doctor and his team – a black nurse and Asian American respiratory therapist – moved the man onto a gurney and went to put him in a hospital gown when they discovered the tapestry of Nazi symbols inked into his skin.

‘The swastika stood out boldly on his chest. SS tattoos and other insignia that had previously been covered by his shirt were now obvious to the room,’ Nichols recalled.

‘We all saw. The symbols of hate on his body outwardly and proudly announced his views. We all knew what he thought of us. How he valued our lives.’

‘Yet here we were, working seamlessly as a team to make sure we gave him the best chance to survive that we could. All while wearing masks, gowns, face shields, gloves.’

As the medics surveyed the sinister markings, the man looked up and breathlessly pleaded: ‘Don’t let me die, doc.’

Nichols said he assured the man that they would do whatever they could to save him. But he soon found himself doubting whether he could keep that promise.