Folks, Its Really Too Late for This Because It’s Over, but Anyway, Watergate Reporter Carl Bernstein Lists 21 Republican Senators Who Have ‘privately’ Expressed Their ‘extreme Contempt’ for Trump 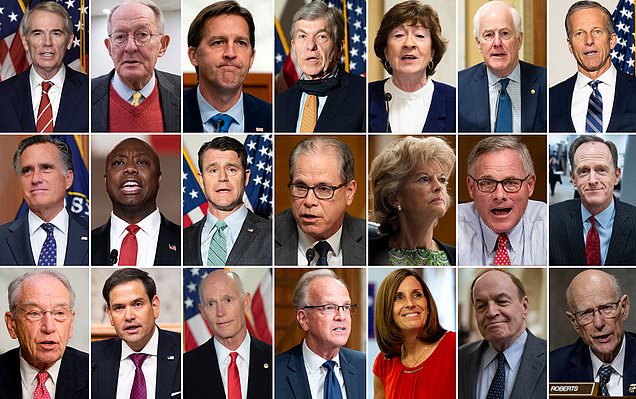 Watergate reporter Carl Bernstein has called out 21 Republican senators who he says have expressed ‘extreme contempt’ for President Trump in private – but have refused to air their grievances in public.

Bernstein accused the senators – including the likes of Mitt Romney, Marco Rubio, Chuck Grassley and Susan Collins – of a ‘craven silence’ that has ‘enabled Trump’s most grievous conduct’.

That includes ‘undermining and discrediting the US electoral system’ Bernstein said, taking aim at Trump’s refusal to concede to Joe Biden while claiming ‘massive fraud’ – a claim that his legal team has failed to substantiate in court.

‘Many if not most of these individuals, from what I have been told, were happy to see Donald Trump defeated in this election as long as the Senate could be controlled by the Republicans,’ Bernstein said during an appearance on CNN.

While some of the names on the list are unsurprising, given their past comments about Trump, some are not known to be critics of the president.

Rick Scott, senator from Florida, spent six figures on Trump TV ads in Florida during the election, helping the president win the state and stave off a Biden landslide.

When he was elected in Ohio in 2018, Mike Braun was an explicitly pro-Trump candidate, though his agenda has changed since then.

Others, such as Pat Roberts, Lamar Alexander and Richard Shelby, have avoided giving an opinion on the president when asked, while quietly voting in line with Trump’s wishes.

‘With few exceptions, their craven public silence has helped enable Trump’s most grievous conduct—including undermining and discrediting the US the electoral system.’

Bernstein is the the former Washington Post journalist who reported alongside Bob Woodward to expose the Watergate scandal which led to former President Richard Nixon’s resignation in 1974 before he could be impeached.