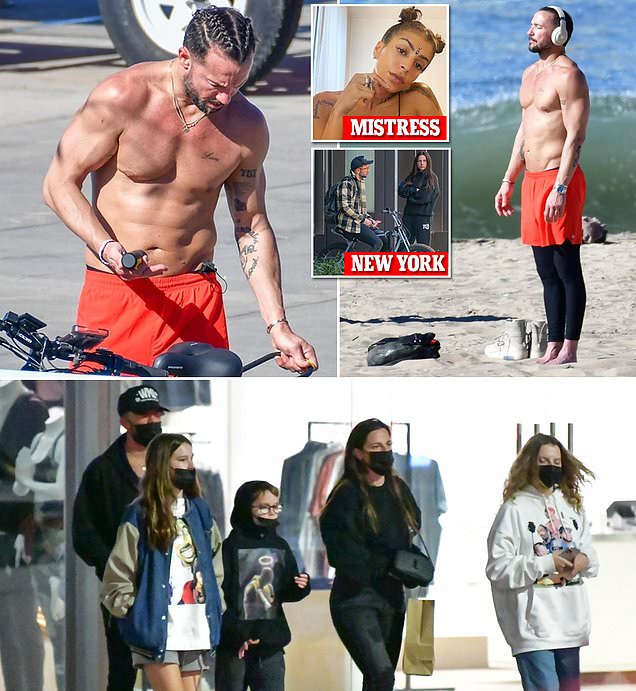 Fired Hillsong pastor Carl Lentz isn’t lying low after his swift dismissal from the celeb-favorite megachurch, as he’s been spotted hitting up the beach and out with his wife and children in Los Angeles, exclusive pictures by DailyMail.com show.

Lentz was publicly fired earlier this month as head pastor of the church’s location in New York City after it was revealed he had been cheating on Laura, his wife of 17 years and mother of his three children.

The 42-year-old religious man, who was close friends with Justin Bieber and his wife Hailey, confessed to the affair on social media, admitting he had not been faithful but said he and Australian-born Laura would be working on their marriage.

It was later revealed that Lentz was having an affair with Brooklyn designer Ranin Karim, 34, who spilled details of their drunken nights together and how he told her that she was the best sex he’d ever had.

Lentz sold his family’s home in Montclair, New Jersey right before the scandal broke and has since moved his family to Los Angeles, where he was seen shirtless while taking working out on the beach on Monday.

And it appears Lentz and Laura, who was also fired from Hillsong, are putting on an united front, as they took their children out for dinner in the city on Sunday night.

Lentz went shirtless and wore neon orange swim trunks with black compression tights underneath when hitting the beach solo Monday morning. He wore his hair braided back in two plaits.

He took a phone call while working out, which consisted of meditating , before unlocking his expensive e-bike and riding off.

The night before, he was seen with wife Laura their three children, daughters Ava, 16, and Charlie, 14, and son, Roman walking around LA after a dinner.

The sighting comes as Lentz was accused of being a ‘womanizing manwhore’ by sources to Page Six.

They recalled Lentz attending a post-Super Bowl party for J.Lo in Miami last year, and acting ‘celebrity-obsessed’ and he and another pastor were ‘running around like inappropriate superfans’ on the yacht.

Lentz was with Rich Wilkerson Jr, himself a pastor of Miami-based Vous Church who is best known for officiating the wedding of Kim Kardashian and Kanye West.

The two pastors were reportedly seen ‘partying their a**es off’ and ‘acting really weird’.

Lentz, 42, was said to have been flirting with several women, some of whom were then seen sitting on his lap, although another source said his wife Laura was in attendance and sat on his lap.

It’s unclear why Lentz and Laura decided to relocate to Los Angeles and if it was due to being fired from this pastoral role in New York City.

But just days before the affair went public, they sold off their ‘contemporary chic’ home in Montclair for $1.5 million on October 23.

The Lentz family reportedly bought the home in 2017 and paid $1.2 million, marking a $300,000 profit from the latest sale, New York Post reports.

The home was sold just 11 days before Hillsong founder Brian Houston fired Lentz following ‘ongoing discussions in relation to leadership issues and breaches of trust, plus a recent revelation of moral failures.’

Laura, 40, also has since left her role at the church. Although Hillsong acknowledged her departure in a statement, the church did not clarify why.

But sources told The Sun that she was cast out because of her husband’s infidelity, despite having known the church founders her entire life.

‘That was their reasoning for having to also get rid of Laura for Carl’s mistakes,’ the source said, adding that Laura was ‘devastated’ by the news which was ‘just the cherry on top of this whole ordeal for her.’

Church leaders reportedly dismissed Laura immediately on learning about Lentz’s affair because ‘if a married couple both work at the church and one of them is terminated, they both will be fired immediately,’ a source said.

In the aftermath of the high-profile scandal, the megachurch has appointed a New York City legal firm to conduct an ‘in-depth review’ into its culture after a ‘number of people came forward’ with concerns.

In a statement given to DailyMail.com last Friday, the church said: ‘Since last week’s announcement of a leadership change at Hillsong East Coast, we have heard from a number of people about their experiences and concerns.

‘It is important that we establish the truth and then do everything we can to ensure our church is both a safe place and one that seeks to glorify God in all that we say and do.

‘For this reason we have decided to appoint a New York based legal firm that is not associated or affiliated with Hillsong to conduct an in-depth review and investigation into all concerns and any wider cultural issues.

‘We are taking this extremely seriously and on the basis of this report, we will be better positioned to take whatever actions are deemed necessary to right the wrongs and see Hillsong East Coast move forward in a way that enables many more people to find hope in Jesus.’

Announcing Lentz’s firing, the church was vague about the specific reasons for his dismissal, only citing ‘breaches of trust’ and a ‘recent revelation of moral failures’.

The following day, Lentz confirmed suspicions of infidelity in a statement posted to his popular Instagram account, writing: ‘I was unfaithful in my marriage, the most important relationship in my life and held accountable for that.

‘This failure is on me, and me alone and I take full responsibility for my actions.’

It didn’t take long for Karim to come forward to tell her side of the story, most recently telling various outlets dirty details of their five-month affair.

‘He would come to my apartment three times a week with Tequila in his backpack so people wouldn’t see him with it in the street,’ the designer told Daily Telegraph.

‘He said the sex we had was the best he’s ever had in his life and he couldn’t stop being with me.’

The Egyptian and Palestinian designer says the relationship began after a chance meeting in New York’s Domino Park in Williamsburg, Brooklyn.

Karim said the pair had begun their ‘love story’ against the backdrop of Covid-19 and found comfort in each other during the strange time.

The 34-year-old claimed Lentz would ‘brag about his BMW’ and talk about his friendship with pop star Justin Bieber.

When Karim found out Lentz was married, she claims she told him to end their fling.

‘When I found out he was married, I told him repeatedly ‘go back to your wife, go back to your family,’ but he kept turning up in the lobby of my apartment block with bottles of Clase Azul tequila for us to drink,’ she claimed.

‘He said he felt bad for what he was doing to his wife, that she was an amazing, good woman, that he had never done it before but his marriage wasn’t perfect.’

Karim believes Lentz was looking for a way out of his ‘boring’ marriage.

However, reality came crashing down when Laura uncovered Lentz’s cheating.

The pastor had synced his iPhone messages to his iCloud. She discovered messages from Karim to him on his work computer while in the Hillsong offices, surrounded by co-workers.

Lentz grew up in Virginia then went to Australia after graduating high school. That is where he was introduced to Hillsong and met its founder, Brian Houston.

In 2003, he returned to the US with Laura to set up Hillsong in New York City.

It has since grown, under his leadership and with the help of Brian’s son Joel, into a celebrity-mecca. Lentz’s salary is not listed anywhere in the company’s most recent annual reports.

They owned a $1.5 million house in New Jersey, which they recently sold. They have also been listed on the deed for a $2 million apartment in Williamsburg, Brooklyn, in the past.

Details of exactly how much they are paid or if any of their living expenses are counted as church expenses is unclear.

Hillsong is registered as a company in Australia, where it began. According to the most recent Australian annual report, the church took in around $70 million, and spent $15 million, including $4 million in staff salaries.