A quarter of a million Americans have died from the coronavirus plague: US hospitalizations are at an all time high of nearly 77,000 as North Dakota becomes the worst place in the world for daily per capita infections 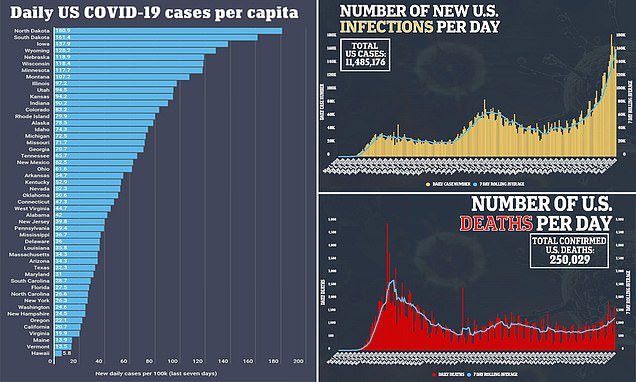 Coronavirus has claimed the lives of more than a quarter of a million Americans, as of Wednesday night, marking a sobering milestone just under 11 months since the first case was identified in the U.S. on January 20.

The U.S. remains the country with the most fatalities in the world, its 250,029 deaths exceeding the death toll of the next-hardest hit country, Brazil, by more than 83,000, according to Johns Hopkins University.

It comes as cases and hospitalizations continue to climb steeply, with a record 76,958 people being treated for in U.S. hospitals as of Tuesday, and nearly 162,000 new infections.

Cases are rising in 51 states and territories in the US and the official count of 11,485,176 infections is almost certainly an undercount. Pandemic modelers now estimate that 12 percent of all Americans have been infected.

Deaths continue to trend upward nationally with 1,700 Americans dying yesterday of COVID-19. The daily death toll is still below the peak 2,500 deaths recorded in April during the initial peak of the virus.

With the ever-increasing hospitalizations, Dr Ali Mokdad, an epidemiologist and disease modeler at the University of Washington’s Institute for Health Metrics and Evaluation (IHME) told DailyMail.com that daily fatalities will likely rise.

However, in-hospital mortality rates remain about 30 percent below what they were in the spring, suggesting deaths will not return to that peak so long as hospital systems don’t become overwhelmed.

In some parts of the country – especially rural areas with fewer medical facilities and health care providers – that danger is starting to look more possible.

The COVID-19 crisis continues to deepen across the United States, with cases, hospitalizations and deaths surging and hotspot North Dakota currently seeing the most infections and fatalities per capita than any other country.

While the surge is widespread, the Midwest is particularly hard hit with hotspot states, including the Dakotas, Iowa and Wisconsin, recording the most cases and deaths per capita in the last week.

North Dakota has had the most new infections and deaths per capita in the last week with 180 infections per 100,000 and 1.8 deaths, according to CDC data.