Daily coronavirus plague deaths spike by nearly 1,900 for first time since May – as infections hit record high of 144k and hospitalizations surge 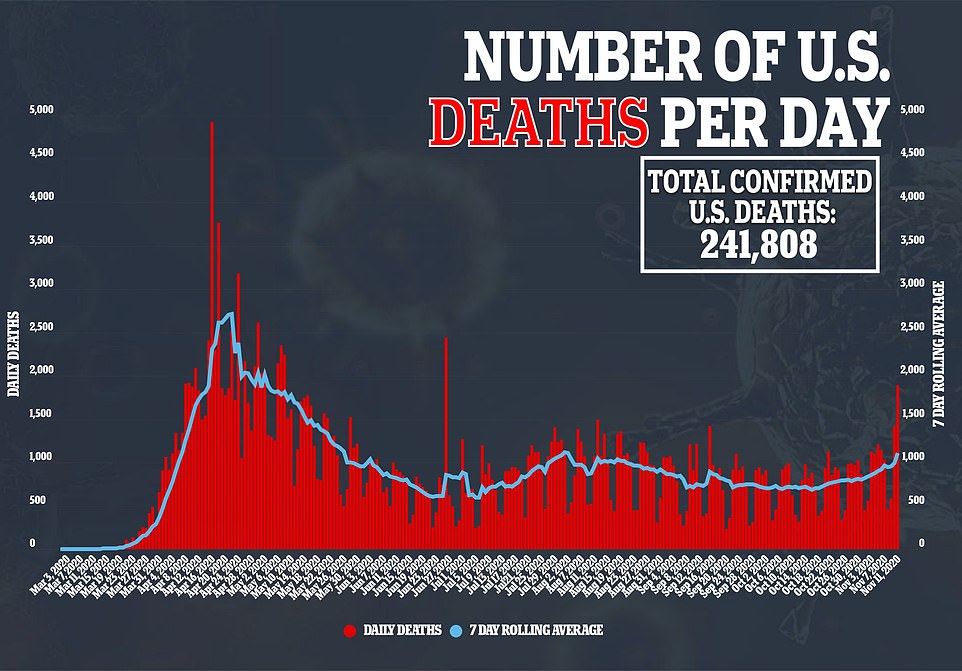 The United States has just recorded the highest number of daily COVID-19 deaths in six months – as infections and hospitalizations continue to spike to record highs across the country.

The death toll spiked to 1,893 on Wednesday, which is the highest number of fatalities since May 8 during the initial peak of the outbreak. It puts the seven-day rolling average of fatalities back over 1,000 per day – a figure not seen since August. The average death toll had hit lows of 600 last month before gradually increasing.

Meanwhile, infections across the country hit a record high for the second consecutive day with 144,133 cases on Wednesday. New cases have continued to soar to all-time highs of more than 120,000 per day over the past week.

The number of hospitalizations across the US also continues to spike to single-day highs with more than 65,000 patients currently being treated.

While new cases and hospitalizations have been surging since October, the number of Americans dying per day has not been rising at the same rates.

Deaths, which are a lagging indicator and can potentially rise weeks after infections, are still down from the peak 2,000 fatalities recorded per day in the spring.

The increases come as Joe Biden’s new COVID advisor, Dr Michael Osterholm, said the US should go into a total national lockdown for six weeks to avoid ‘virus hell’ and suggested that the federal government pay workers while country is shutdown.

Dr Anthony Fauci, however, has insisted a lockdown doesn’t need to happen.