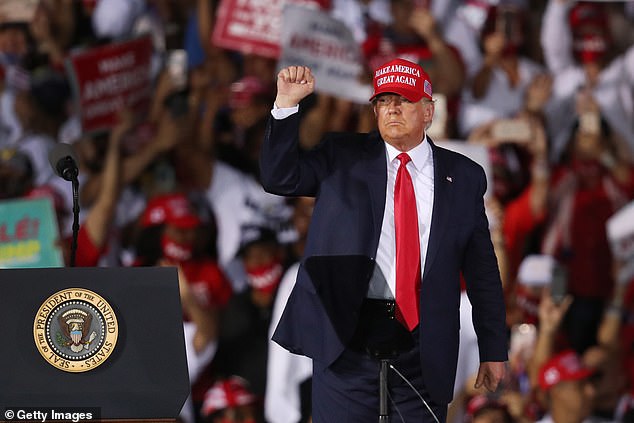 Donald Trump is planning a series of rallies at which he will show off obituaries of people who his team say have voted, according to a report.

The president has made it clear that he does not intend to concede defeat to Joe Biden, despite him being judged by independent media analysts to have no way of winning the election.

He has promised to fight every step through the courts.

On Sunday night Axios reported that the Trump campaign was mobilizing its troops and readying for war.

‘We want to make sure we have an adequate supply of manpower on the ground for man-to-man combat,’ one adviser told Axios.

In addition to the rallies, designed to highlight specific legal challenges, Trump is gathering what was described as ‘a campaign-style media operation’.

The media team will be headed by Tim Murtaugh, a former television reporter in Virginia who joined the Trump campaign in February 2019, and now serves as communications director.

One advisor told the site that Murtaugh’s group will issue ‘regular press briefings, releases on legal action and obviously things like talking points and booking people strategically on television.’

In Georgia, Arizona and Pennsylvania the Trump team is planning fresh legal challenges – many of those raised so far have already been dismissed.

More than 90 campaign staff have been redeployed from Florida to Georgia, where former congressman Doug Collins will be leading the campaign’s recount efforts.

In Arizona, Kory Langhofer, who was the counsel for Trump’s 2016 transition, will serve as lead attorney, Axios said.

And in Pennsylvania, Ronald Hicks, a partner in the Pittsburgh office of the Porter Wright law firm and co-chair of the firm’s election law practice, will lead the Trump campaign’s legal charge.

On Sunday night Philadelphia City Commissioner Al Schmidt, a Republican, told 60 Minutes that his office, which runs the vote count, has received death threats as a result of the Trump campaign’s accusation of vote rigging.

‘From the insight looking out, it feels all very deranged,’ he said.

‘At the end of the day we are counting eligible votes, cast by voters. The controversy surrounding it is something I don’t understand.

‘It’s people making accusations that we wouldn’t count those votes, or people are adding fraudulent votes, or – just, coming up with all sorts of crazy stuff.’