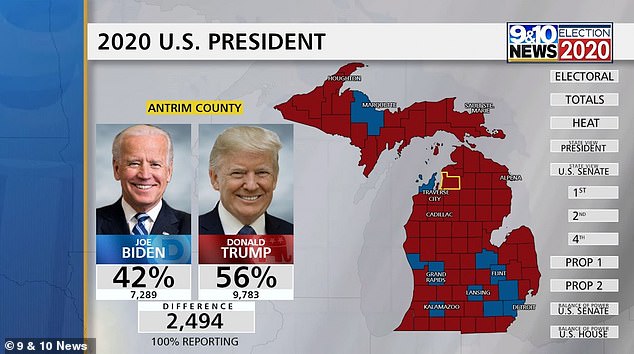 Republicans claim a software glitch in Michigan incorrectly gave 6,000 votes to Biden before county election officials caught the error and corrected it, giving Trump a 2,000 vote lead in the county.

The glitch was noticed by local election officials in Antrim County on Wednesday after results showed that the former vice president won the county in the presidential race.

Questions were raised after the county first reported a local landslide for BidenI in an area that usually votes Republican. Officials acknowledged the results seemed ‘skewed’ and promised a second look. More than 16,000 votes were cast.

It wasn’t a full recount of every ballot. Scott said results that were spit out by vote machines were tallied again.

‘The machine itself counted the ballots correctly,’ he said.

Scott said officials were working with the company that provides election software and hardware to determine what happened.

Michigan GOP Chairwoman Laura Cox shared during a press conference that in addition to Antrim County, 47 other counties also use the software.

Cox advocated for the counties to ‘closely examine’ the results of the election to see if there were any other discrepancies.

The tactic by the GOP is aimed at discrediting the legitimacy of the election across the country and in the state, where Biden leads by more than 146,000 votes.

The former vice president currently has Trump beat in the state, securing 50.6 percent of the vote compared to the president’s 47.9 percent.

Michigan’s GOP party was unable to say what system is routinely used to count ballots, but spokesman Tony Zammit added that the system had not been used under the tenure of Cox – who took office in early 2019.