British PM Boris Johnson announces second lockdown to avoid ‘medical and moral disaster’: Non-essential shops will shut and travel is banned under strict restrictions that start on Thursday and run for a month with furlough scheme extended 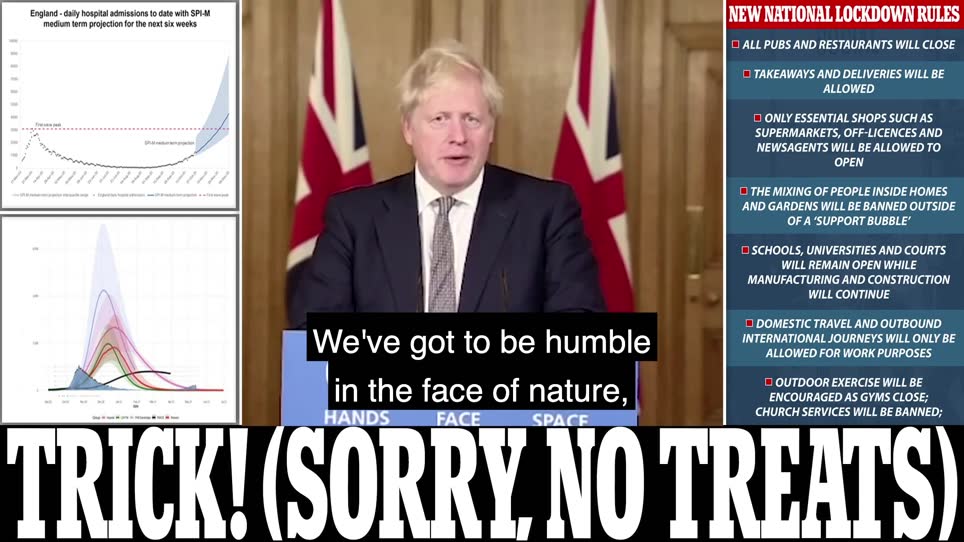 After weeks insisting he is sticking to local restrictions, Boris Johnson completed a humiliating U-turn by announcing blanket coronavirus restrictions for England at a prime-time press conference alongside medical and science chiefs Chris Whitty and Patrick Vallance. The PM said the draconian measures – which come into force from midnight Thursday morning – were the only way to avert bleak Sage predictions of 85,000 deaths this winter, far above the previous ‘reasonable worst case’, and the NHS being swamped before Christmas. Another 326 UK fatalities were declared today – nearly double last Saturday’s tally. But infections, which can represent the current situation more accurately, were down five per cent on a week ago at 21,915 in a possible sign that the rise could already be slowing. The brutal squeeze – billed as ‘Tier Four’ on the government’s sliding scale – will see non-essential shops in England shut until December 2, as well as bars and restaurants despite the ‘absolutely devastating’ impact on the already crippled hospitality sector. Households will be banned from mixing indoors during the period, and people will be told not to leave home and travel unless for unavoidable reasons, such as work that cannot be performed remotely, or to take exercise. However, unlike the March lockdown schools and universities are expected to remain open – despite unions warning they are key to the spread.