‘A gorgeous, model of a man – I was there as he slipped away without a fuss’: Sean Connery’s widow Micheline shares the final moments of the life of the Bond star whose wit and charm defined an era as he dies aged 90 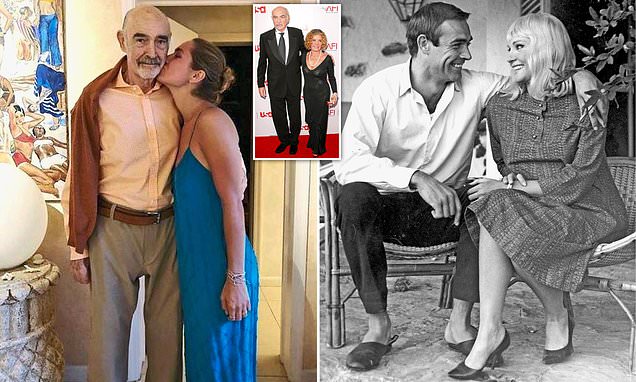 Revealing how his final months were blighted by dementia, Micheline (pictured together inset), who was married to the Oscar-winning star for 45 years, said: ‘It was no life for him. He was not able to express himself latterly. At least he died in his sleep and it was just so peaceful. I was with him all the time and he just slipped away. It was what he wanted.’ Born Thomas Sean Connery (pictured left with granddaughter Saskia, and right with first wife Diane Cliento) into a working-class family in Edinburgh’s Fountainbridge district, he left school at the age of 14 and joined the Royal Navy. He later worked in a variety of jobs, including as a milkman, labourer and lorry driver, as well as taking up bodybuilding. It was a visit to London in 1953 to enter the Mr Universe contest that kickstarted his acting career. The future James Bond star took the opportunity to audition for a West End production of South Pacific and landed a part in the chorus. Further stage roles followed and he also broke into television and film, eventually winning a prominent role in the 1959 Disney film Darby O’Gill And The Little People. But it was being cast as 007 that catapulted him to international stardom and acclaim.