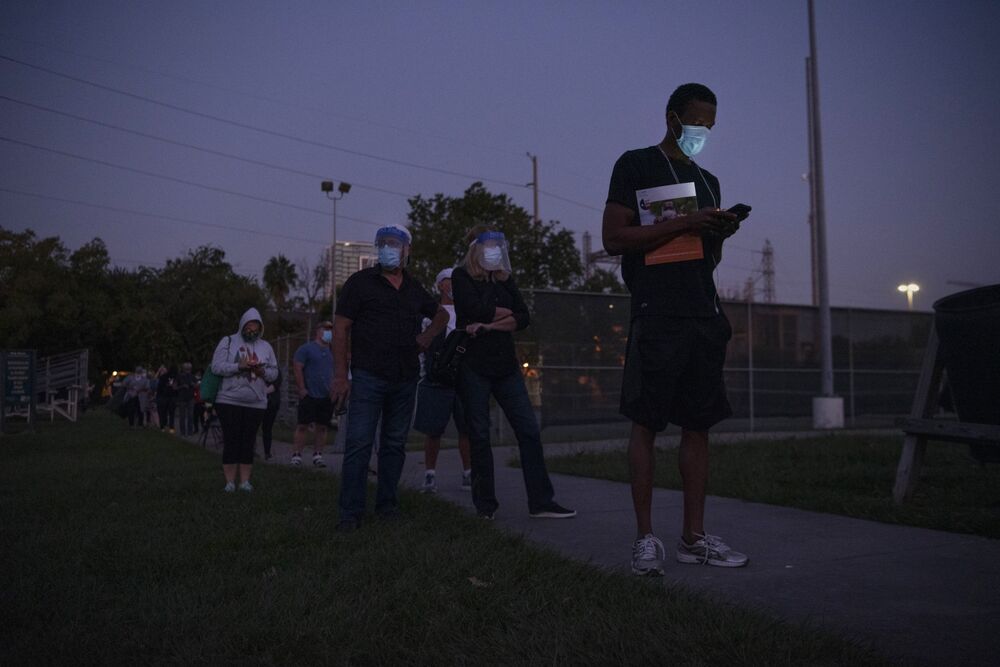 (Bloomberg) — A dramatic surge in early voting across Texas cities is infusing fresh hope in Democrats’ dream of shaking Republicans’ once-solid grip on the state.

From Austin to Houston, and in their sprawling suburbs, voter turnout is shattering records in Texas, which hasn’t gone for a Democratic presidential candidate since 1976. Polls show the party’s nominee, Joe Biden, within striking distance of President Donald Trump, and the Cook Political Report on Wednesday moved Texas to a “toss up” from “leans Republican.” Biden’s running mate, Kamala Harris, will visit Houston, Fort Worth and McAllen this week.

Almost 8.5 million Texans had cast ballots by Wednesday, representing about 95% of the entire vote in 2016. Rapidly growing and increasingly diverse suburbs are the sites of some of the biggest upticks in early voting, and Democrats point to a surge in female voters as cause for optimism. Unmarried women make up a third of the Texans voting in this election who didn’t cast a ballot in 2016, the party’s state headquarters said earlier this week.

“We as Democrats are voting like our lives depend on it,” said Cynthia Ginyard, chair of the Democratic Party in Fort Bend, a fast-growing county that encompasses Houston suburbs such as Sugar Land and Katy and has come to embody the demographic shifts that Democrats are seeking to capture.

By Wednesday, 61% of all registered voters in Fort Bend had cast their ballots, either in person or by mail, making it one of nine counties that had surpassed their total vote counts for the entire 2016 election. The county went for Hillary Clinton by a margin of 6.6 percentage points in 2016.

Travis County, which includes Austin and its rapidly expanding suburbs, has also seen early voting exceed the total of all 2016 ballots. Dallas County, another solidly blue one, is on track to reach the same milestone. In Harris County — the state’s largest and home to Houston — almost 1.3 million people have voted early.

For more than a quarter-century, Texas was firmly conservative, producing gun-toting, church-going politicians like President George W. Bush and Rick Perry, a former governor and U.S. energy secretary. Dallas, Austin, Houston and San Antonio were liberal blips on an expansive red radar. But a population boom driven by immigrants and newcomers has put the state’s politics up for grabs.

Corporations like Apple Inc. and Toyota Motor Corp. have expanded, bringing employees who also pack their politics. As the cost of living rises within city limits, young people are putting down roots in places like Katy and Round Rock, in Williamson County.

And since 2011, Texas has been one of five majority-minority states. Its suburbs, like many other parts of the country, are no longer predominantly white enclaves. In Harris County, 8,800 early voters have the Vietnamese last name Nguyen, according to a Houston Chronicle reporter’s tweet.

National Democrats contend that turnout like that puts the state within reach. Michael Bloomberg, founder and majority owner of Bloomberg News parent Bloomberg LP, has said he’s spending $15 million to support Biden in Texas and Ohio. In Texas, his Independence USA PAC will air TV ads in both English and Spanish that will focus on the coronavirus.

Even if Biden falls short, cinching competitive races for the state House of Representatives could give Democrats a strong hand in redistricting after the census.