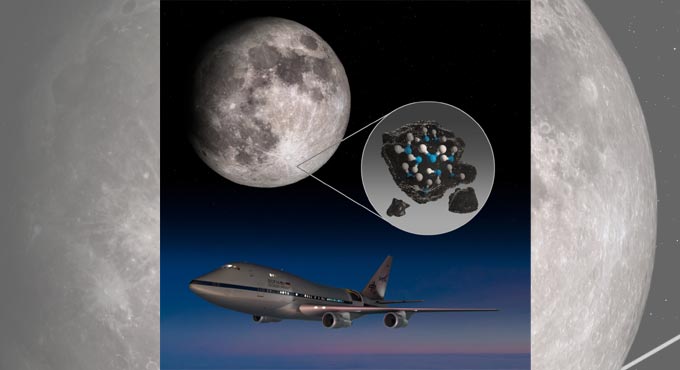 Water has been discovered on the sunlit surface of the moon, NASA announced Monday, an important revelation that indicates water may be distributed across the lunar surface – and not just limited to its cold, shadowed places such as the poles.

This is good news for astronauts at future lunar bases who could tap into these resources for drinking and rocket fuel production.

“We had indications that H2O – the familiar water we know – might be present on the sunlit side of the moon,” Paul Hertz, director of the astrophysics division in the science mission directorate at NASA headquarters in Washington, said in a statement. “Now we know it is there. This discovery challenges our understanding of the lunar surface and raises intriguing questions about resources relevant for deep space exploration.”

Water is a precious resource in deep space and a key ingredient of life as we know it. Whether water on the moon is easily accessible for use as a resource remains to be determined, NASA said.

“We don’t know yet if we can use it as a resource, but learning about water on the moon is key for our Artemis exploration plans,” NASA tweeted.

The Artemis program is a plan to send the first woman and next man to the lunar surface in 2024.

“If we can use the resources at the moon, then we can carry less water and more equipment to help enable new scientific discoveries,” said Jacob Bleacher, chief exploration scientist for NASA’s human exploration and operations mission directorate.

The discovery was made by NASA’s Stratospheric Observatory for Infrared Astronomy (SOFIA), which analyzes the atmospheres of distant planets and moons.

Dubbed the world’s largest airborne observatory, SOFIA is a modified 747 that flies high in the Earth’s atmosphere to provide its nearly 9-foot telescope with a clear view of the universe and objects in our solar system, NASA said.

Flying above 99% of our atmosphere’s obscuring water vapor, SOFIA observes in infrared wavelengths and can detect phenomena impossible to see with visible light.

Scientists believe water on the moon came from comets, asteroids, interplanetary dust, the solar wind or even lunar volcanic eruptions. They will have a better idea of the sources “if we can get down on the surface and analyze samples of the ice,” the University of Colorado’s Paul Hayne said.

The lead researcher, Casey Honniball, a postdoctoral fellow at NASA’s Goddard Space Flight Center, said at a news conference that she wanted to make it clear the SOFIA study had not found puddles on the moon. Rather, the identified hydrogen and oxygen molecules are so far apart they are neither in liquid or solid form, she said.

The findings were published Monday in a pair of studies in the journal Nature Astronomy.