President Trump Votes in Person in His New Home State of Florida and Says ‘When You Send in Your Ballot, You Cannot Have Security Like This’ as He Joins 52 Million Americans Who Have Already Voted 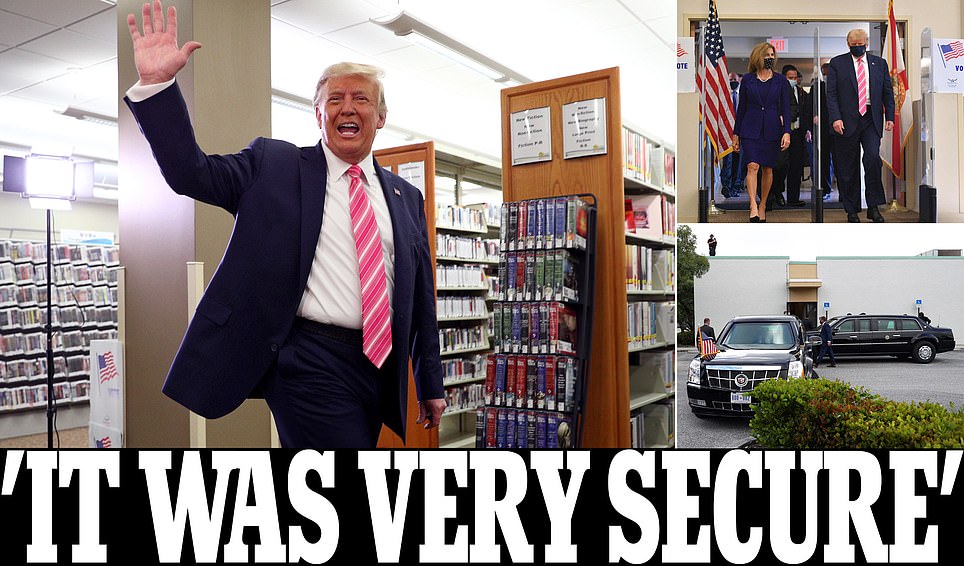 President Donald Trump, who has railed against mail-in voting, cast his ballot in person on Saturday near his Florida home.

The president voted for himself at the Palm Beach County Main Library Saturday morning telling reporters it was a ‘very secure vote’ and warning that when you send in your ballot by mail ‘you cannot have security like this’.

First Lady Melania was notably absent from the trip and it is not clear when she will cast her vote or through which method.

The president joins the more than 52 million Americans who have already voted, according to the Elections Project, which tracks early voting data.

Trump also became the first presidential candidate to cast a ballot for himself.

The Biden campaign hasn’t said when or how Joe and Jill Biden will vote. The couple is registered in Delaware, which allows any registered voter to request a mail-in ballot. The state does not allow early in-person voting.

Vice President Mike Pence and second lady Karen Pence voted in Indianapolis on Friday, dropping their absentee ballots in a drop box at the the Indianapolis City-County Building.

Trump’s motorcade departed Mar-a-Lago at around 9:43 a.m. Saturday morning and arrived at the polling station minutes later where he cast his ballot in person.

He emerged moments later to a different area of the library wearing a mask before taking it off and telling reporters ‘it was a very secure vote’ and ‘everything was perfect’.

Trump once again took aim at mail-in voting saying ‘you cannot have security like this’ with the process.

He has repeatedly hit out at mail-in ballots during his campaign making several unsubstantiated claims that they are ‘a scam’.

Trump told reporters Saturday it ‘was an honor to be voting’ as he confirmed: ‘I voted for a guy named Trump.’

When asked when Melania was voting, Trump was uncharacteristically silent and ignored the question.

It is unclear if the First Lady will vote in person or through the mail-in method that her husband is vehemently critical of.

White House Press Secretary Kayleigh McEnany said there was no one else in the ballot station room voting at the same time as the president and confirmed he cast a paper ballot.

Several supporters had gathered on the stretch of road just outside Trump’s Palm Beach estate and right around the library cheering ‘four more years’ and waving Trump 2020 signs ahead of his appearance.