‘The Joe Biden meeting happened, the emails are correct and Joe took 10% of equity’: Bannon says everything reported in Hunter laptop scandal is true and reveals how lawyer for Biden’s son tried to get hard drive back – proving ‘it’s no Russian intel op’ 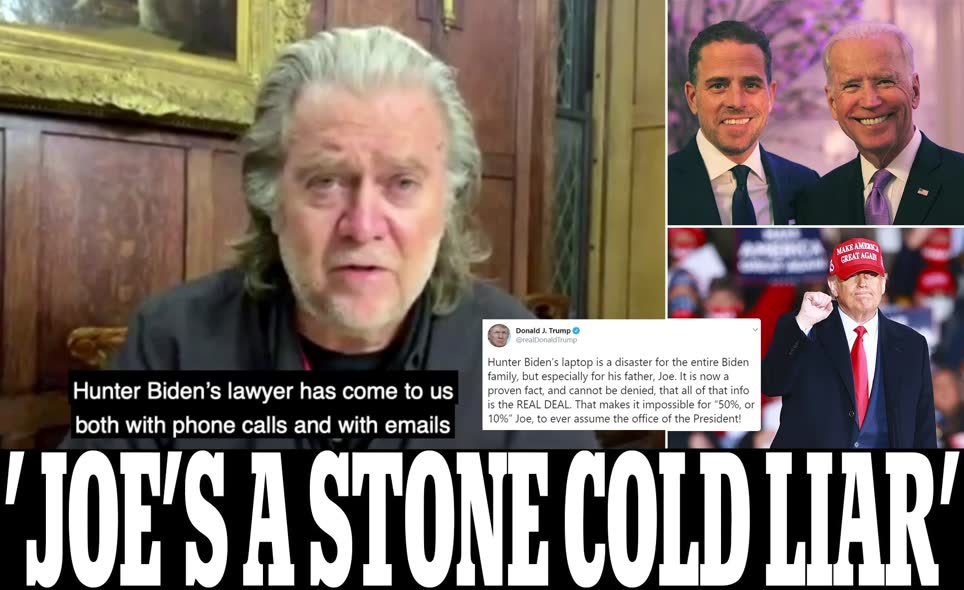 Steve Bannon said Sunday everything that has come to light from Hunter Biden’s hard drive is true as he paints Joe Biden as a ‘stone cold liar’ after revelations show deep financial ties between the Biden’s and Chinese Communist Party.

‘Joe Biden has lied about this for years,’ Bannon told Sky News in an interview Sunday.

‘What Fox did, which was very interesting on that issue but also on the Chinese – they actually went to the people on the emails and contacted them. What was so stunning is that they reported last night that one, the guys on the emails said absolutely the meetings happened. This is not off of some Russia intelligence operation. That emails correct, the meanings correct and, by the way, that 10 per cent of the equity is Joe Biden’s,’ Bannon said.

The former White House strategist for President Donald Trump said Hunter’s lawyer tried to email the repair shop to get the laptop back and has since then contacted Bannon and his team to retrieve the sensitive hard drive.

‘Hunter Biden’s lawyer has come to us both with phone calls and with emails saying, ‘hey, I’ve got to get the hard drive back’,’ Bannon said.

‘This is not some Russian intelligence operation; they admit it’s their hard drive,’ he continued in proving the validity of the information found on the laptop. ‘We have the emails from the Lawyer, if we need to release them, we’ll release them.’

Republican Senator Ron Johnson of Wisconsin, chairman of the Committee on Homeland Security and Governmental Affairs, is calling on FBI Director Christopher Wray to confirm or deny details regarding the hard drive.

In a letter to Wray, which was obtained by Fox News Sunday, Johnson says that a whistleblower contacted the committee on September 24.

He said they claimed to possess a laptop that Hunter left at his business, and that he had turned it over to the FBI.

Johnson noted in his letter that his staff immediately asked the FBI to confirm certain details to better validate the claim, but the bureau said they would not comment on any of the information.

Trump weighed in on Hunter’s emails on Twitter Sunday, and gave his Democratic rival a new nickname: ‘10% Joe.’

‘Hunter Biden’s laptop is a disaster for the entire Biden family, but especially for his father, Joe. It is now a proven fact, and cannot be denied, that all of that info is the REAL DEAL,’ Trump tweeted. ‘That makes it impossible for ‘50%, or 10%’ Joe, to ever assume the office of the President!’