Gunman opens fire during pro-Trump parade: Cops hunt armed driver who fired at another car during a MAGA vehicle rally on Ohio highway 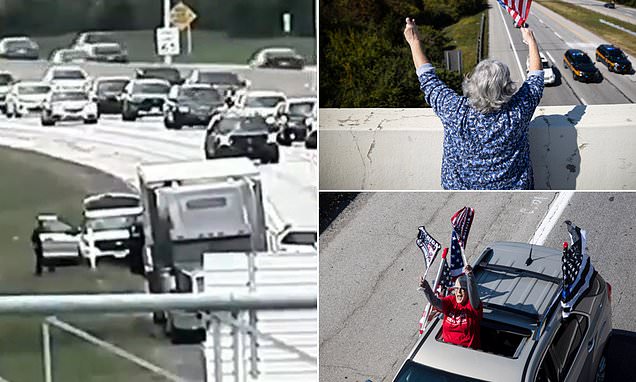 Police are on the hunt for a gunman who opened fire during a Pro-Trump parade in Ohio on Saturday morning. The incident occurred near the town of Hillard shortly before 11 AM as a cavalcade of Trump supporters drove along the I-270. According to police, the shooter was a ‘participant in the parade’ and ‘fired a shot through a victim’s window’. The condition of that person is not publicly known, and the shooter is still at large. It comes as thousands of Trump’s fans took to the streets in parades across the country to show their support for the president as he battles coronavirus at Walter Reed. Fans gathered outside the Bethesda, Maryland, hospital in vigil, took part in a boat flotilla in Florida and took part in a prayer service in Staten Island, New York.