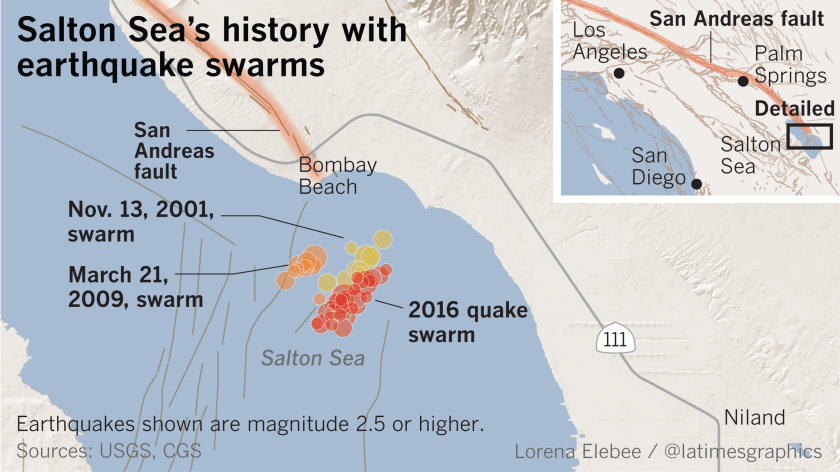 Swarms of earthquakes continue to rattle the Salton Sea area in Southern California, with more than a dozen sizable quakes since midnight, the U.S. Geological Survey reported Thursday.

Most of the tremors are below 3.0 magnitude, but a few earthquakes registering over 4.5 magnitude have been recorded, the USGS reports. The agency had recorded at least 240 quakes by Wednesday night.

An #earthquake swarm has kicked off southwest of the #SaltonSea today, producing 240 earthquakes as of 8pm Pacific. The largest earlier this evening was M4.9.
So what does this mean? We’ve put together some scenarios to explain what could happen next. https://t.co/wMzKa8FKQM pic.twitter.com/ow9r7J5FH4

“One of the largest swarms we have had in the Imperial Valley — and it is historically the most active swarms in SoCal,” seismologist Lucy Jones wrote on Twitter.

The quake swarms “are located in an area of diffuse seismic activity between the San Andreas fault in the north and the Imperial fault to the south,” the USGS says. Previous swarms happened in 1991 and 2012.

“Past swarms have remained active for 1 to 20 days, with an average duration of about a week,” the USGS reported.

The swarm most likely will continue for several days, possibly including quakes up to 5.4 magnitude, but there’s a slim chance of a major earthquake registering 7.0 magnitude or higher, the agency says.

The first swarm of 30 earthquakes rattled the area for one hour starting at 4 p.m. Wednesday, according to the USGS.

The first quake, a 3.0, hit near Westmorland. Another 27 quakes followed within the hour, all centered around Westmorland. More than half were magnitude 3.0 or greater, USGS data shows.