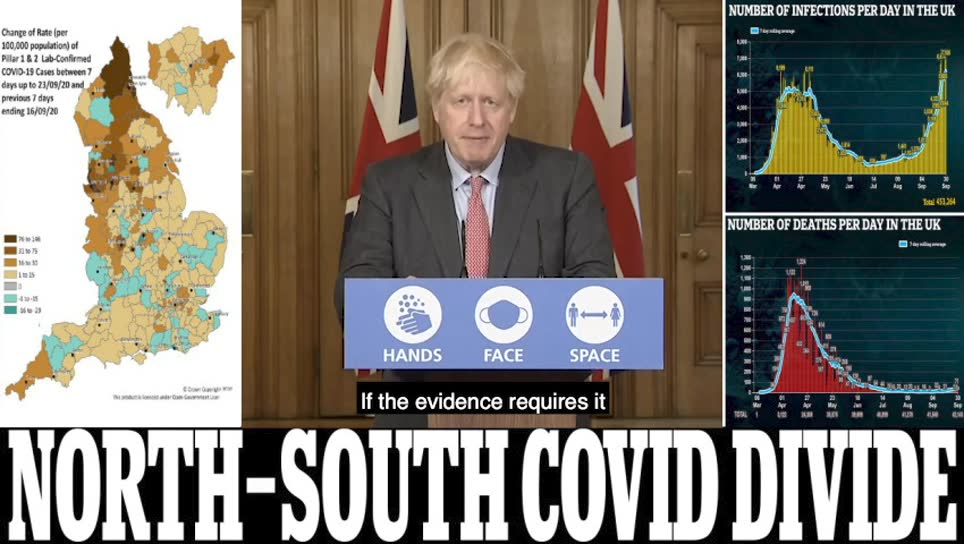 Boris Johnson and his top two scientific advisers tonight wheeled out a set of striking statistics laying bare Britain’s Covid-19 divide between the North and the South, as the Prime Minister warned of a second ‘more costly’ lockdown unless the outbreak tails off.

In a rallying cry urging Britons to keep fighting the disease to protect the NHS and save lives, Mr Johnson insisted the country knows how to drive down the virus because ‘we did it before’. And in warning the UK had reached a ‘critical moment’, he vowed not to ‘throw in the sponge’ and pledged to bring in tougher measures if needed.

And in a defiant message to Tory hawks desperate to reopen the economy faster, the PM insisted that letting the virus ‘take its course’, in a Sweden-style approach, risked overwhelming the NHS and causing thousands more deaths. He also warned it was too early to judge whether the Rule of Six and 10pm curfew were working.

Top experts have repeatedly warned that Britain needs to learn to live with Covid-19 because it will be with us for generations. Businesses fear tougher measures — similar to ones imposed in the first draconian lockdown — would cripple the economy even further.

Mr Johnson addressed the nation alongside Professor Chris Whitty and Sir Patrick Vallance, despite coming under intense pressure drop scientists from such briefings amid complaints they are being used as ‘propaganda’ to back up increasingly draconian restrictions.

The trio presented maps that starkly exposed the North-South coronavirus divide. And official data shows that the average number of positive tests each day is at least twice as high in North West England as in any other region, and that Scotland’s cases are 14 times higher than they were at the beginning of August, outpacing England’s outbreak.

An average 1,595 cases of Covid-19 are being diagnosed in the North West every day now, compared to just 150 in the South West, while Yorkshire and the Humber and the North East face the second highest infection rates. All of the 10 areas with the worst case-per-person ratios are in the north, while eight of 10 of those with the lowest are in the south. Professor Whitty said there was a ‘heavy concentration’ of coronavirus towards the top of England.

In a plea to the public the Prime Minister said: ‘If we put in the work together now then we give ourselves the best possible chance of avoiding that outcome and avoiding further measures.’

‘I know some people will think we should give up and let the virus take its course despite the huge loss of life that would potentially entail. I have to say I profoundly disagree. I don’t think that is what the British people want. I don’t think they want to throw in the sponge. They want to fight and defeat this virus and that is what we are going to do.’

‘Even as we fight Covid, it is vital that people get all the treatment they need for other conditions. But I must be clear, if the NHS were to be overwhelmed by covid, then no-one could get any such care.’

Highlighting the sharp rise in infections and defending his recent comments warning that the UK could see 50,000 coronavirus cases a day by mid-October, Sir Patrick said grimly: ‘Things are definitely going in the wrong direction.’

Professor Whitty slapped back at critics, saying they had accused him of being ‘too optimistic and too pessimistic on numbers’. But he said that in March the government failed to recognise how fast the virus was spreading and the mistake could not be repeated. In a gloomy message, he said: ‘We have a long winter ahead of us.’

Earlier, Mr Johnson finally bowed to demand to give MPs a vote before any fresh lockdown restrictions – after furious Speaker Lindsay Hoyle blasted him for treating the Commons with ‘contempt’.