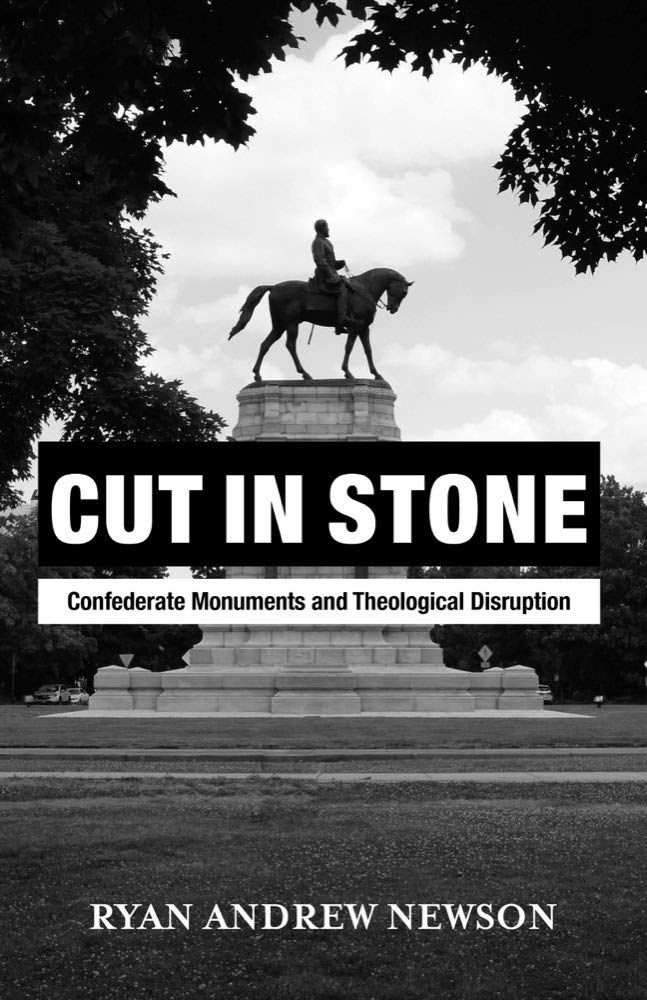 Review by David Henreckson, who is the director of the Institute for Leadership and Service at Valparaiso University. He is the author of The Immortal Commonwealth: Covenant, Community, and Political Resistance in Early Reformed Thought.

In the Hebrew Scriptures, stone monuments are earthen witnesses to a sacred covenant. When Jacob contractually maneuvered himself out from under his father-in-law Laban, he set up a pillar in the highlands of Gilead. It was supposed to be a reminder of a legal separation, but the fragility of the peace was underscored by the dueling names given to the monument: Jacob’s in the Hebrew tongue, Laban’s in Aramaic. The monument was barely dedicated before it became an object of linguistic civil war.

What’s old is new again. Disputes over historical markers and their meanings are simply the continuance of culture war by other means. Theologian Ryan Andrew Newson wrote his new book Cut in Stone: Confederate Monuments and Theological Disruption in the wake of the 2017 protests and counter-protests in Charlottesville, Virginia. Thousands of organized white nationalists infamously marched through the University of Virginia campus chanting language—“White Lives Matter!” “Blood and Soil!”—charged with centuries of racial supremacy. The material cause for the march was the threatened removal of a statue of Confederate General Robert E. Lee. Erected in 1924, the statue presented a genteel, handsome Lee—hat in hand, martial but not militaristic. The stone general is resigned but undefeated, like the Lost Cause he represents.

The statue lasted decades in the city center without scrutiny, but in the 21st century, it struck some as strange to venerate the leader of a rebellion devoted to the preservation of chattel slavery. Newson’s book delves into the history of Confederate monuments like this one, asking what sort of political ideology—or theology—underwrites them. What did these monuments—often constructed many decades after Lee resigned at Appomattox—mean for the communities that created them? What gave them their near-sacred value? And what is the appropriate political and theological response to markers of a contested American legacy? Can you—should you—erase a moral tragedy?

When they were originally constructed, monuments to Confederate leaders and soldiers were remarkably free of cultural guilt. Hundreds of statues appeared in over 30 states in the aftermath of Reconstruction, as the South began to rehabilitate its image—and historical memory. As Newson points out in fascinating detail, the Confederacy was re-memorialized decades after its military defeat. Monument construction was most intense from 1890 to 1950, a span of time that unsurprisingly coincides with Jim Crow.

Other defeated nations and causes have wrestled with how to remember a tragic history. Germany after the Second World War underwent a therapy of historical penance that continues even today. The Confederacy, however, did not. Its monuments served a “palliative” purpose, Newson argues, aiming to “alleviate collective suffering without addressing the root cause of the pain.” So the stone figures stood as reminders of the genteel honor and heroic manhood of figures such as Lee, Stonewall Jackson, and Jefferson Davis—eliding their militant defense of chattel slavery. With these symbolic moves, the memory of slavery was quickly shunted into the distant past, even as its system of involuntary unpaid labor shifted from the plantation to the chain gang in the late-19th century and the systemic incarceration of African Americans in the 20th.

As a historical project, Cut in Stone focuses on the Reconstruction-era South, but Newson’s theological analysis touches more broadly on the nature of historical memory and the moral obligations of a political community that is still haunted by the sins of its fathers. Newson’s book was published in the middle of the summer of 2020—a wry moment of providence if ever there was one. While Charlottesville in 2017 provides the backdrop to the book, more recent events have made its subject matter even timelier.