Popular high school football coach is shot dead in his home with his own handgun by his 15-year-old nephew who then robbed him of $7,000 in cash 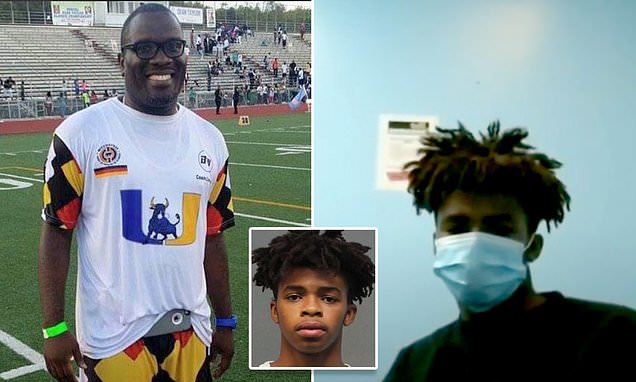 A 15-year-old boy confessed to fatally shooting his uncle, a beloved Miami high school football coach, while staying over his house and robbing him of $7,000 in cash, police said.

Charles Alexander, who is said to have a history of mental illness, has been charged with second-degree murder and armed grand theft in the killing of 46-year-old Corey Smith on Monday.

Prosecutors in Miami-Dade County plan to charge him as an adult, the Miami Herald reported.

Alexander was staying at Smith’s home in West Little River when he used the football coach’s own 9mm Beretta handgun and shot Smith dead in a den, according to police.

Surveillance footage showed that Alexander was the only person at home at the time of the shooting, it is alleged. Police also said Alexander confessed to the shooting to his mother.

Investigators also found more than $7,000 in cash belonging to the coach inside a pair of jeans hidden in Alexander’s black bag, police said.

During a hearing in Miami-Dade juvenile court on Thursday, a judge ordered Alexander be held in secure detention.

Charles Alexander is the son of 41-year-old Lamar Alexander, the convicted felon who was shot and killed after carjacking a UPS truck and leading police on a high-speed chase last November.