Donald Trump tears into the New York Times for ‘made-up, phony’ story that he paid no income tax for 11 years, just $750 in 2016 and 2017 and reported huge losses across his business empire 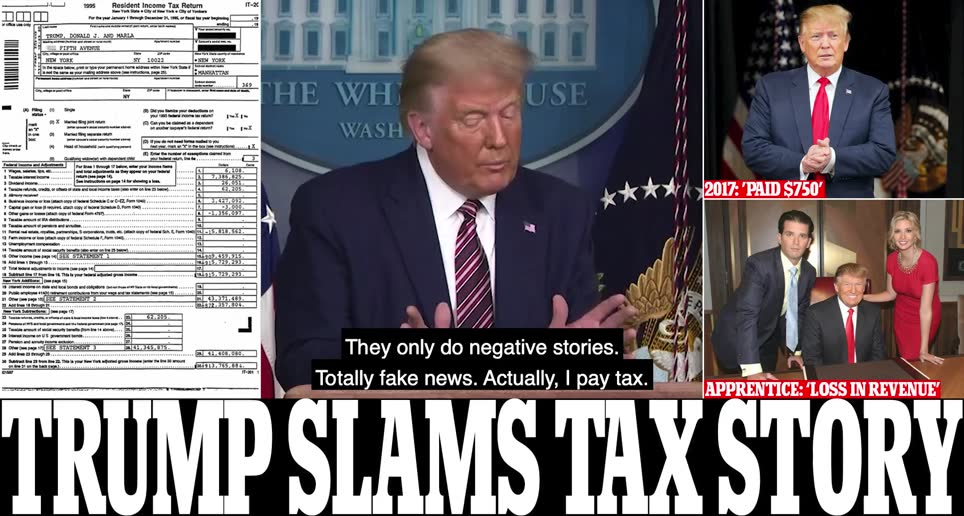 Donald Trump on Sunday labeled The New York Times report that he paid just $750 in federal income tax in 2016 and then again in 2017 as ‘phony and fake’.

Documents show the president paid no income tax in 11 of the 18 years looked at, according to a report by the paper. He was able to minimize his tax bill by reporting heavy losses across his business empire, including at his golf courses.

That’s despite receiving $427.4 million through 2018 from his reality television program and other endorsement deals. The president could also face mounting financial pressure in the years ahead. The tax records show he’s carrying a total of $421 million in loans and debt that are primarily due within four years.

Responding to the report Sunday evening Trump told reporters: ‘It’s totally fake news. Made up. Totally fake news.’ The president, who campaigned for office as a billionaire real estate mogul and successful businessman, said he has paid taxes, though he gave no specifics.

The Times reported Trump claimed $47.4 million in losses in 2018, despite claiming income of at least $434.9 million in a financial disclosure that year. The Times emphasized the documents reveal only what Trump told the government about his businesses, and did not disclose his true wealth.

Trump has previously blasted the long-running quest for his financial records as a ‘continuation of the most disgusting witch hunt in the history of our country’. The businessman is the only modern president who has refused to release his tax returns. Before he was elected, he had promised to do so.

Trump’s lawyer Alan Garten, said that ‘most, if not all, of the facts appear to be inaccurate’. He added: ‘Over the past decade, President Trump has paid tens of millions of dollars in personal taxes to the federal government, including paying millions in personal taxes since announcing his candidacy in 2015.’

The disclosure, which the Times said comes from tax return data it obtained extending over two decades, comes at a pivotal moment ahead of the first presidential debate Tuesday, and weeks before a divisive election.