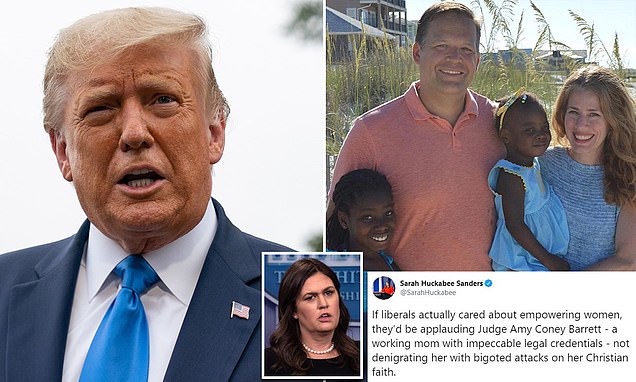 News of the likely nomination has drawn strong criticism from Democrats who have attacked Barrett’s faith, and have labeled her an ‘extremist’ over her views on abortion. But it lead to Republicans leaping to her defense.

Barrett, a 7th U.S. Circuit Court of Appeals judge, was already considered a likely selection, and had met with the president this week and during a prior round of consideration for the last open seat.

Sources told CNN the White House was indicating Barrett was the intended nominee. Several other outlets including The New York Times and NBC News also reported Barrett was the choice.

‘The machinery is in motion,’ a source told CNN.

Trump wouldn’t confirm the reporting but told reporters Friday night that he had made a decision. ‘In my own mind, yes,’ the president said at Joint Base Andrews.

When asked if Barrett was the one, Trump wouldn’t say.

Ever the showman, Trump remained coy about his choice Friday evening as he returned from a campaign swing. When asked whether lawmakers were being told it was Barrett, Trump responded with a nod on the tarmac at Joint Base Andrews, before replying, ‘Is that what they’re telling you?’

‘You’ll find out tomorrow,’ he went on to say, flashing a wide smile. ‘Look, they´re all great. It could be any of one them. It could be actually anyone on the list.’

The likely nomination has already earned nods of approval from Senate Republicans – the vast majority of whom already committed to taking up a vote before the election without knowing who the nomination would be.

There still remained the chance the president would go in a different direction with hours before his planned announcement – with the pick having not only a long-term impact on the nation’s laws but also political impact on the presidential elections and control of Congress.