If Trump Appoints a Third Justice, the Supreme Court Would Be the Most Conservative It’s Been Since 1950 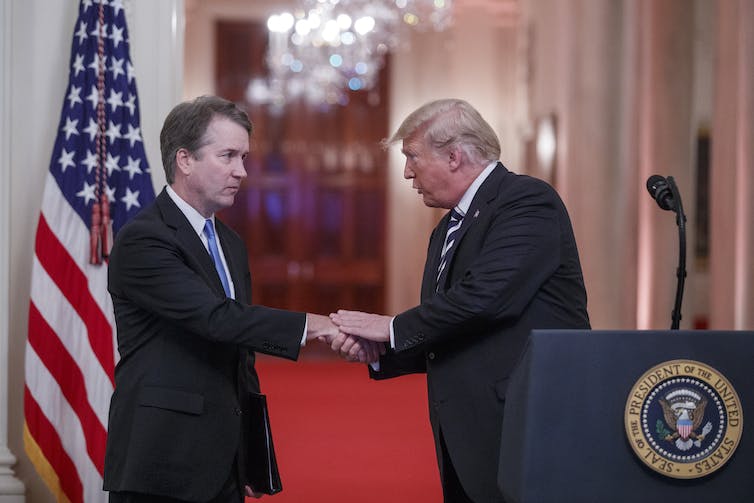 The death of Supreme Court Justice Ruth Bader Ginsburg gives President Donald Trump an opportunity to shift the ideological tenor of the court. If the Senate were to confirm a Trump nominee, the court would become more conservative than it has been since 1950 — both more conservative than previous courts, and potentially as far away ideologically from the elected branches of government as it has been in a long time.

So just how conservative could the court become?

Here’s how I did my research

I created a statistical model to estimate the ideological views of justices, presidents and members of Congress. For justices, I used information from their votes on cases and opinions, which tell us how their ideologies compare to those of the other justices. Their opinions on previous cases reveal how their ideological positions compared to those of members of the previous courts that decided those earlier cases.

For members of Congress, I used their floor roll call votes to estimate how each one’s ideology compares to the ideologies of his or her colleagues. I also used the positions members of Congress take on Supreme Court cases to compare their ideologies to those of the justices. I estimated those positions based on statements they made in amicus briefs, on the floor of Congress and, increasingly, on Twitter.

Similarly, I estimated presidents’ ideological positions as compared to those taken by both the court and Congress from their public positions on congressional roll call votes and statements and amicus filings on court cases.

Using these measures, I could compare the ideological tenor of each branch of the federal government with that of its counterparts from 1950 to the present.

Presidential ideologies tend to stake out either the liberal or the conservative extreme. I estimated House and Senate ideologies as the positions of the median member. Those bodies’ ideologies are generally closer to the middle, shifting when a different party controls the chamber.

I measured the Supreme Court’s ideology with the court’s ideological median at any given time. While very liberal during the Warren Court from 1953 to 1969, the court median has hovered on the center right since the mid-1970s, except for a brief liberal interlude after Justice Antonin Scalia’s death in February 2016 until Justice Neil Gorsuch filled that seat in early 2017.

A third Trump nominee would make the court more conservative

The expected court median that would result if, as expected, Trump’s eventual nominee is confirmed to the court would be substantially more conservative than it is today, creating the most conservative court since 1950.