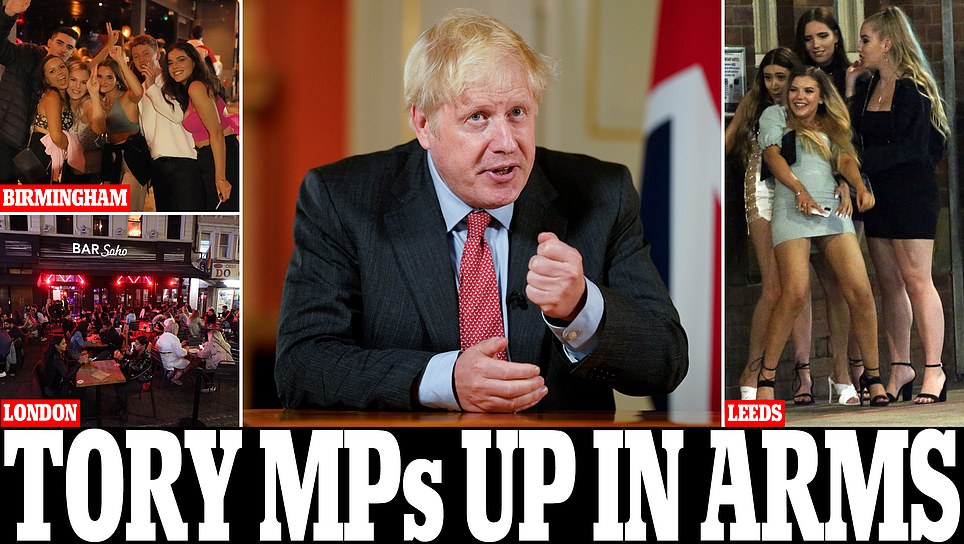 Furious Tory MPs have turned on ‘authoritarian’ Boris Johnson as he ordered the British public to obey his draconian new coronavirus restrictions – or face an economically devastating second national lockdown.

The panicking Prime Minister warned Britons last night they faced a long hard winter of police-enforced curbs on their freedom, saying the alternative was ‘many more families losing loved ones before their time’.

In a dramatic televised address to the nation, Mr Johnson, flanked by a Union Jack, said he was ‘deeply, spiritually reluctant’ to make new ‘impositions, or infringe anyone’s freedom’ after unveiling new measures in the House of Commons.

But he said it was necessary to reintroduce working from home rules and a swathe of social measures in order to avoid a dramatic surge in deaths, overwhelming the NHS and spark a second, economically devastating total lockdown.

The beleaguered premier faced fire from all sides as he U-turned on his push to reopen workplaces. He also faced barbs for introducing other swingeing new measures including a 10pm pub curfew and £200 fines for mask rule-breakers in England, with the Army potentially drafted in to help police, in the face of a surge of coronavirus infections sweeping the country.

But speaking from Downing Street, he warned that ‘iron laws of geometrical progression are shouting at us from the graphs that we risk many more deaths, many more families losing loved ones before their time’.

He even hit out at his critics – Tories and business leaders who fear his restrictions will further batter Britain’s flailing economy – adding: ‘To those who say we don’t need this stuff, and we should leave people to take their own risks, I say these risks are not our own. The tragic reality of having Covid is that your mild cough can be someone else’s death knell.

‘And as for the suggestion that we should simply lock up the elderly and the vulnerable – with all the suffering that would entail – I must tell you that this is just not realistic. Because if you let the virus rip through the rest of the population it would inevitably find its way through to the elderly as well, and in much greater numbers.’

Responding to the Prime Minister’s grim address, Telford MP Lucy Allan questioned on Twitter whether the UK’s ‘collective health’ was really at risk: ‘Measures to tackle #covid must be proportionate to the risk. The virus is a serious threat to certain vulnerable groups.

‘We must protect these groups with targeted measures. Shutting down society causes massive damage to health, lives, and livelihoods of the whole population.’

Meanwhile Brexit Party leader Nigel Farage blasted Mr Johnson’s ‘authoritarian’ response to the coronavirus crisis, angrily tweeting: ‘The PM says we are a ‘freedom loving country’, but will fine you £10,000 and send the army in if he likes. This is authoritarian – I don’t believe his promises on testing or the competence of the government.’